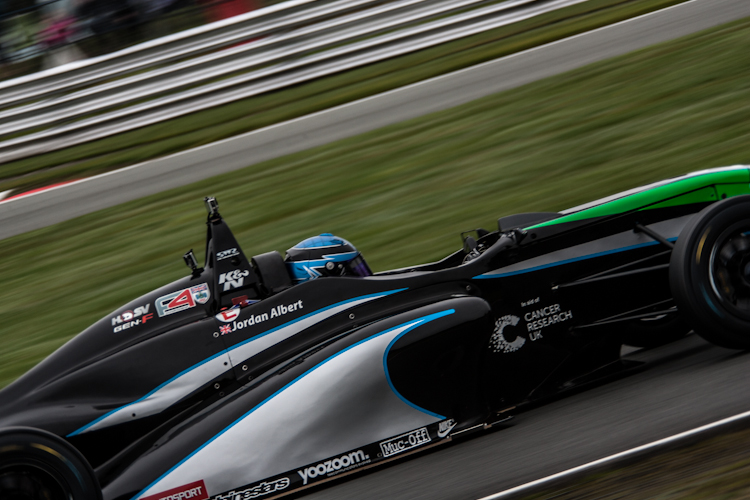 Jordan Albert put behind him a disappointing race one and two to take victory in a hectic third and final Duo BRDC F4 race of the weekend at Oulton Park.

Albert took the win for Team SWR after withstanding pressure early on from Ciaran Haggerty, with his eventual victory margin standing at 7.882 seconds.

The race started in dramatic fashion with Sebastian Lanzetti just one of a number of drivers involved in a first lap crash at Old Hall; the South African being forced to retire as a result. Also suffering was Harri Newey, who plummeted through the pack after a poor getaway from second, leaving Haggerty to lead chase to Albert out front.

Race two sparring partners Will Palmer and Jack Bartholomew again found themselves embroiled in battle early on the race, with the former making his way past Bartholomew for sixth on lap five out of 12. Also on the move was the recovering Newey, who dispatched Fernando Urrutia for tenth. Elsewhere, Akhil Rabindra saw his hopes of another top ten finish dashed after pitting with bodywork damage.

At the half way mark it was Albert from Haggerty out front, with the Scot just three tenths adrift of Albert’s rear wing. However Haggerty’s pursuit came to a premature end following a spin, instead leaving him vulnerable to race two winner Chris Mealin behind in third.

With Albert clear out front it became a race for second, with Manxman Mealin making it past Haggerty into New Hall on lap ten. His race went from bad to worse on the last lap, with another mistake leaving him coursing through the gravel and falling through the field.

There was no such drama for Albert out front, who put behind him a race one crash and untimely race two pit stop to win the third race of the weekend. Mealin topped off an impressive weekend with another podium finish in second, with Mexican driver Rodrigo Fonseca taking the last spot on the podium.

Tom Jackson came home fourth, ahead of Palmer and Bartholomew behind. Haggerty eventually finished seventh after his trials and tribulations, ahead of Zubair Hoque, Newey, and Urrutia who round out the top ten.