After years of Spanish domination in the world of Grand Prix motorcycle racing, the Brits are fighting back. Last weekend’s Grand Prix of the Americas was a historic occasion for the United Kingdom with two winners in a single day and with Argentina following hot on the heels of that, the feel-good factor could be set to continue.

Not since the 1977 Swedish Grand Prix has Britain seen two winners in a single weekend but in the space of two hours, Danny Kent and Sam Lowes ended 38 years of waiting with two contrasting, but equally impressive victories.

For Kent, his win wasn’t just the most assured ride of his Grand Prix career but arguably, the most dominant single performance in the history of Moto3. The lightweight class has become synonymous with bunch sprints at the end of Grands Prix, with Qatar a prime example as fourteen bikes crossed the finish line together, but Kent ripped up the script completely.

In slightly damp conditions, Kent followed the leaders for the opening couple of laps before seizing the advantage decisively. From that point onwards, the Leopard Racing rider was in another league to his competitors, pulling out a second per lap on the rest of field before declaring with an advantage of 8.5 seconds. In the history of Moto3, this kind of victory is certainly a one-off but the big question in the context of this season is exactly that. Is that what this race will prove to be?

With one long straight and a tight, twisty infield, the Termas de Rio Hondo circuit lends itself to another Moto3 bunch scrap with few places for a rider to escape but Kent will certainly start among the favourites on Sunday. Fabio Quartararo was another big sensation stateside by beating the two oldest riders on the grid to second and the Frenchman has already shown that unfamiliarity with the circuits isn’t a disadvantage for him.

He may still only be 15 but Quartararo is already showing them the way (Photo Credit: MotoGP.com)

Alexis Masbou and Efren Vazquez were the two riders he defeated in Austin and the pair have shown enough in the opening rounds to suggest they will be contenders again while Enea Bastianini has shown he can fight for the podium wherever he lines up on the grid.

The finish line follows immediately on the exit of the last corner and the lack of a straight leading up to the chequered flag will surely favour the KTMs though as they eye a fightback. Neither a KTM nor a Husqvarna have finished in the top four so far but Miguel Oliveira is surely in with a shout of changing that after showing race-winning pace at both of the opening rounds, only to crash out. Last year’s Argentine winner Romano Fenati has done anything but, with qualifying continuing to prove his Achilles heel, but the enigmatic Italian can’t be written off, nor can Isaac Vinales who shone in Qatar.

Few riders shone under the Losail floodlights as brightly as Sam Lowes but Britain’s sole Moto2 star undid all his hard work with a crash in the race itself. Practice for the Grand Prix of the Americas gave every impression that history would be repeated with a heavy highside in FP2 leaving Lowes battered and bruised but the Speed Up rider showed immense bravery and tactical nous to end his wait for a maiden Moto2 win.

Sam’s consistent pace through the opening two weekends has already done enough to convince us that this victory won’t be a flash in the pan but Britain’s newest Grand Prix winner can expect some stiff competition if he is to achieve back-to-back successes. Johann Zarco can lay claim to being the rightful winner in Qatar given the broken brake lever which denied him three laps from home and the Frenchman pushed Lowes all the way in Texas. Expect the Ajo Motorsport rider to throw everything at the Speed Up on Sunday.

Defending champion Tito Rabat has hardly done the no.1 plate justice so far in 2015 with mistakes limiting him to thirteen points from the opening two races but the disparity between the two overall results has kept him well within range of the championship leader and given the way he dominated the inaugural Moto2 Grand Prix of Argentina, Rabat may well be the man to beat here.

But who does lead the championship two races into the season? The answer, to the surprise of many, is Alex Rins after two outstanding performances from the class rookie. Replacing Maverick Vinales at the Paginas Amarillas HP 40 team, Rins had big shoes to fill but the 19 year old is doing just that at the moment, displaying the maturity that many expect to take him all the way to MotoGP. Rins may not take the series lead back home with him to Europe but whatever happens, he has made the transition from Moto3 to Moto2 way more seamless than he had any right to. 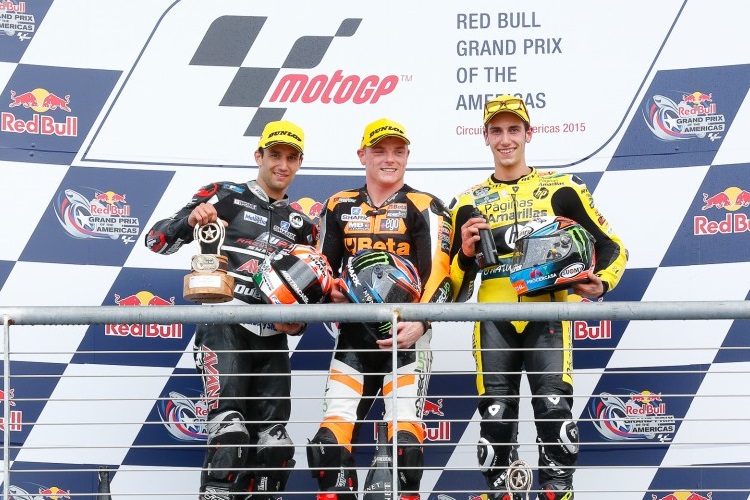 Zarco and Lowes have been impressive but they trail Rins in the championship (Photo Credit: MotoGP.com)

Marc Marquez knows full well how to make the step up without difficulty and since graduating to the premier class, Marquez has never been beaten in the United States, a record he maintained last Sunday in Austin. The world champion put the disappointment of Qatar behind him by seeing off Andrea Dovizioso and Valentino Rossi but the Ducati and Yamaha riders kept him honest enough to suggest the championship won’t be a one-horse race this year. The Yamaha riders in particular fancy their chances and we’ve already learned in 2015 that the Ducati threat cannot be discounted.

Bradley Smith couldn’t complete a British hat-trick in the States but the Tech 3 rider did have a victory of sorts to celebrate having beaten his satellite rivals to the flag. Cal Crutchlow will have every intention of striking back after edging his compatriot in Qatar and the battle between the two is sure to be a fascinating sub-plot in South America this weekend.

After so many years of disappointment, we were truly spoiled by the success of Britain’s finest last weekend but the seven riders across all three classes will relish the challenge of keeping the Union Flag flying above the centre of the rostrum for another weekend. A tough ask for sure, but one we can certainly dream of.