The combined Endurance Racing Series and 360 MRC All Comers Series grids at Rockingham.

The Endurance Racing Series got underway yesterday with a three hour race on the Rockingham International Super Sportscar circuit. The new championship merged with another new series from the 360 Motor Racing Club for its first practice, qualifying and grid giving us a thirteen car field. Nick Smith went to Corby for thecheckeredflag.co.uk to witness the birth of two new endurance championships.

Free practice and qualifying were completely merged but the race was different. The 360 MRC event was planned to run over two hours while the ERS raced for three, which meant that the four 360 machines took a chequered board rather than a flag before heading to the pits at full speed.

The Radical RXC showed impressive straight line pace on the way to the first race victory in the ERS.

RAW Motorsport brought their Radical RXC prototype for Osman Usef and Rob Weldon claiming second place on the grid in qualifying after a late run. Practice also netted second place but ended with the car on a rope, being dragged back to the pits. The team quickly repaired the problem and over the three hours the RXC first lost out to ING Sport’s BMW before surging back into second. That turned into the lead when a rival Radical retired in the pits.

The new BMW Z4 GT3 will no doubt become a major factor later in the championship.

Ian Lawson, Mike Wilds and Anthony Wilds debuted their new BMW Z4 GT3 in the opening round of the series. The new car started well, taking third in both the free practice and qualifying sessions and it continued to equip itself well during the race.

After grabbing second place at Deene Hairpin on the opening lap and holding it through a brief safety car interlude, the Z4 slipped back to third place. When the race leader retired on the 64th lap, around the halfway mark, the ING car regained second which it held to the close. A late charge saw Ian Lawson un-lap himself against the RAW Radical but time just ran out.

The Newbridge Motorsport Porsche 997 GT3 Cup of Gillaume Gruchet is a familiar friend after a full season in the Britcar Endurance Championship. Familiarity is no guarantee of speed though and tenth place in free practice was disappointing. There was some improvement in qualifying which put Guillaume in seventh but the real advance came during the race. The Frenchman ended up on the bottom step of the podium after battling though the field.

Intersport Racing are another familiar name but the team have taken on a new challenge. They ran their usual BMW M3 in the 360 MRC race but bought a Lamborghini SuperTrofeo for the Endurance Racing Series. The raging bull had a reasonable run to fourth place in all three sessions, the only problem on Mark Radcliffie and Kevin Clarke’s horizon was a tyre degradation problem in the final stint of the race.

Mike Moss became least favorite person at Rockingham after dumping gravel all over Tarzan for the second time in a day.

Mike Moss’s Moss Motorsport machine had what we call a character building day. Practice saw the BMW M3 buried in the gravel at Tarzan, it also saw him take sixth place in the session though. Qualifying resulted in improvement, the black and green M3 lined up fifth for the start of the race. A return to the gravel on the opening lap of the race, this time at Gracelands, put the car an instant lap down, did heavy damage to the front of the car and caused the first of two safety cars. 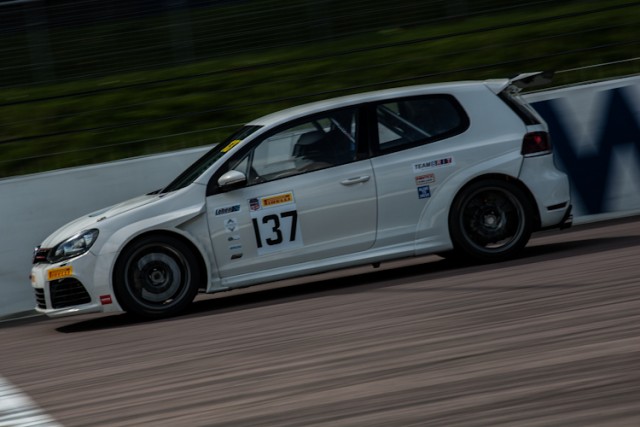 Team BRIT exceeded expectation at Rockingham, running at a strong pace all day.

The Team BRIT entry was never expected to do brilliantly, the Ginetta Supercup star David Pittard was an experienced high point in an entry of rookies. The car was officially finished on Wednesday, though further adaptations are still needed for other injured servicemen to be able to drive the car. Martyn Compton and Danny Holland have never raced before.

The car did rather well all things considered, finishing in sixth of seven but with thirteen laps over the Circlesigns entered Hyundai. Eleventh in practice and tenth in qualifying meant a steady improvement throughout the day. Not bad for a new car and a completely new effort.

The Hyundai Coupe of Circilesigns battled to stay ahead of Grumpy and Baldy go Racing all day.

The Circlesigns Hyundai Coupe was consistent at least, constantly in last place. No improvement over practice and qualifying was made worse by an incident towards the end of the race. Steven Ayres was at the wheel when it appeared to suffer from brake failure and carried straight on into the gravel at the Brooke Chicane. A quick snatch later the car returned to the pits, waited for the brake fluid to cool and went back out to finish the race. At least Ayres and co-driver Sarah Niblett finished which is more than can be said for Zak Chapman or the Lohen MINI.

Zak Chapman had a dream of a morning, no one could match his pace in practice, he was almost seven seconds clear of the RAW Motorsport RXC. The SR8 is obviously a very quick car because the RXC couldn’t match the pace of Chapman in qualifying. Come the race Zak romped away into the lead, pulling seconds a lap out of the fellow Radical until an overheating problem forced the SR8 into retirement before irreparable damage could be caused to the engine.

It’s not often a MINI Cooper S, be it ever so well engineered, can keep up with a purpose built Ginetta GT car. Luke Wright and Audrey Magiy had almost 1.9 seconds over the 360 Motor Racing Club entered G50 in practice. The gap was similar but in the other direction in qualifying and the race looked good until lap 59. The MINI pulled into the pits and into retirement, the first of three retirements over the two championships.

The MINI Cooper of The Odd Couple performed admirably throughout the 360 Motor Racing Club All Comers event.

The 360 Motor Racing Club All Comers Series got off to a good if under-subscribed start. Five cars over four entries competed in the two hour endurance race. The difference between cars and entries is because Grumpy and Baldy go Racing not only wins the most impressive team name award, but was the only outfit to opt for a relay entry. ‘Baldy’ or Nigel Innes started the race in a white BMW before pitting. As Innes pulled into the paddock at the end of pit lane Karl Cattiliff, a.k.a. Grumpy set off in a blue BMW to take the second stint.

It obviously works too because despite having no pit crew at all and two aging BMWs the relay method won the race outright! WML’s Chris Whiteley and Nic Hayes took second in the Ginetta who had a fantastic six lap slogging match with, The Odd Couple’s MINI Cooper at the start of the race.

Kevin Clarke pushes his E92 M3 down pit lane after stopping in the wrong pit box.

Intersport’s E92 BMW M3 was doing very well over the course of the meeting. Clarke started the car, holding ground behind the team’s Lamborghini Gallardo before the embarrassing problem of stopping in the wrong pit box. After Anna Walewska got on board the car started showing problems. A pit stop for oil and water showed a leak somewhere in the V8 engine. Soon after the car was parked. Walewska did mention a gear selection issue during her stint too.