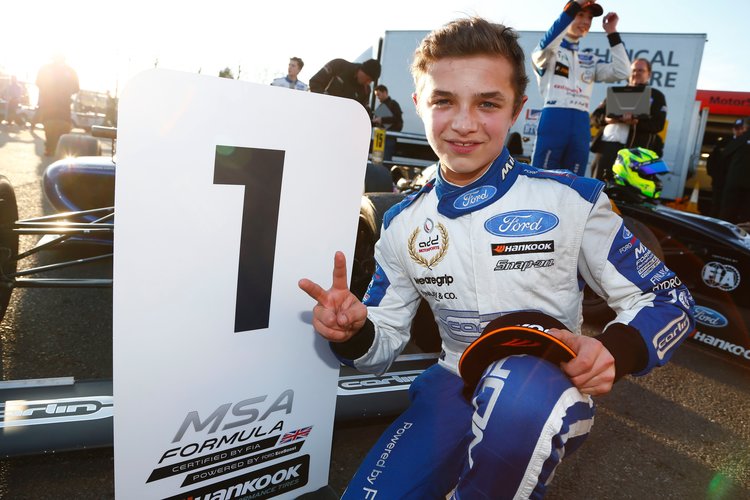 Lando Norris made a dramatic start to his MSA Formula Career and is looking ahead to the next round in order to improve his performance and retain his advantage.

Having gone into the season with experience of car racing, 15 year old Norris has as been marked as a championship favourite. Some may say this high expectations for someone so young, but Norris has lived up to the hype and has come out of the first weekend in MSA Formula with 2 wins out of the 3 races.

On the weekend, Norris commented; “With so many people watching the first ever MSA Formula race, it was really great to get the win and make a bit of history.”

Norris’ excellent result means that he leaves the weekend with the championship lead and 56 points. This means that pressure will grow on the young drivers head as we move to Donington Park.

The Carlin Motorsport competitor becomes one of a long list of successful drivers for the team. Along with established names of Nico Rosberg, Sebastien Vettel and Daniel Ricciardo, he will be hoping to continue the success with the team over the course of the season.

When asked about the relationship he had with his team, Norris said; “Carlin have been brilliant so far. They’ve pushed me in the right areas and worked really hard to give me an advantage. Hopefully it’s just the start of things to come.” Having signed with the team back in December at the end of last year, he has had the time with the team to prepare. This was shown during the pre-season tests when he topped the fourth day of the tests.

He already has success behind him having become the youngest winner of the CIK FIA KF World Championship, also becoming the youngest karting world championship winner. To add, as of this week he was also picked to become a FIA ambassador for road safety alongside Lewis Hamilton.

The only fault in his performance came in race 2 where the team had decided to run old tyres for his reverse grid spot. This meant that he went from 8th to 11th in the early stages. He would fight through to 9th, but this was not a true example of his pace and overtaking ability.

After the weekend, Lando commented; “I now want to keep improving and come back even stronger for Donington. Hopefully, if I can keep putting in performances like these and winning races, it will be a good season.” With the next race in two weeks time and the mid season test before that, Lando will want to improve to keep his advantage over his rivals.

By Matt Jeffray
4 Mins read
In the second of our three-part series, we take a look back at the top three finishers of this season’s British F4 Championship, and what the future holds for these future stars. Next up, Carlin’s vice-champion Zak O’Sullivan.
F4 British Championship

By Matt Jeffray
4 Mins read
In the first of our three-part series, we take a look back at the top three finishers of this season’s British F4 Championship, and what the future holds for these future stars. First up, Argenti Motorsport’s super consistent Casper Stevenson.
F4 British Championship