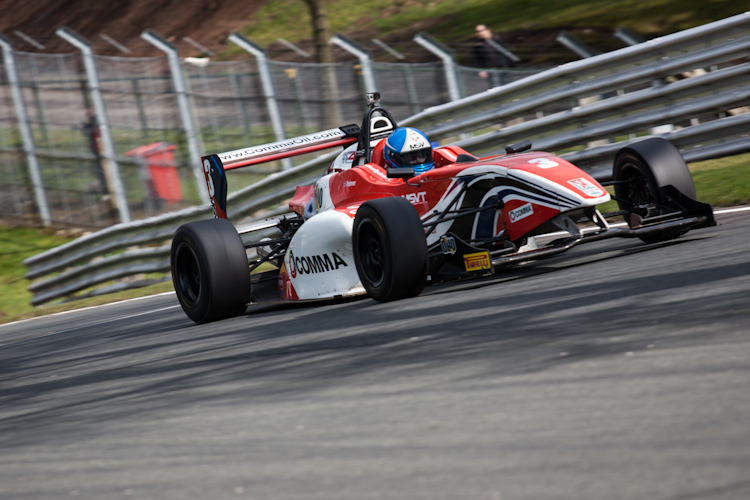 Will Palmer converted pole position to victory after an impressive drive saw him take the spoils in the Duo BRDC Formula 4 championship season opener at Oulton Park.

Palmer made the most of his fastest lap in qualifying to lead from the front in the race, rarely coming under pressure from Harri Newey behind to take the flag by 4.815 seconds.

Three laps into the race saw Newey retake Lanzetti for second, with a brilliant move heading towards Hislop bend, before setting off in search of a disappearing Palmer out-front. Further back, Fernando Urrutia and Akhil Rabrinda scrapped for tenth, the latter eventually losing out.

Newey’s deficit to Palmer began to shrink at the halfway stage of the race, with the series rookie taking half a second out of Palmer three laps in a row. However, a mistake in sector two saw Palmer slip back, allowing Palmer to further establish what would become an unassailable lead out front.

With Palmer home and dry, it was down to Hillspeed’s Lanzetti to chase down Newey for second, with Tom Jackson in fourth offering little threat four seconds back, and the battle for fifth between Bartholomew, Haggerty, Chris Mealin, and Sisa Ngebulana consuming itself.

At the flag however it was Palmer who took the win, ahead of Newey and a close Lanzetti in third. Jackson came home a lonely fourth, with Batholonew holding on to round out the top five ahead of Haggerty, Mealin, Ngebulana, Rodrigo Fonseca and Urrutia.