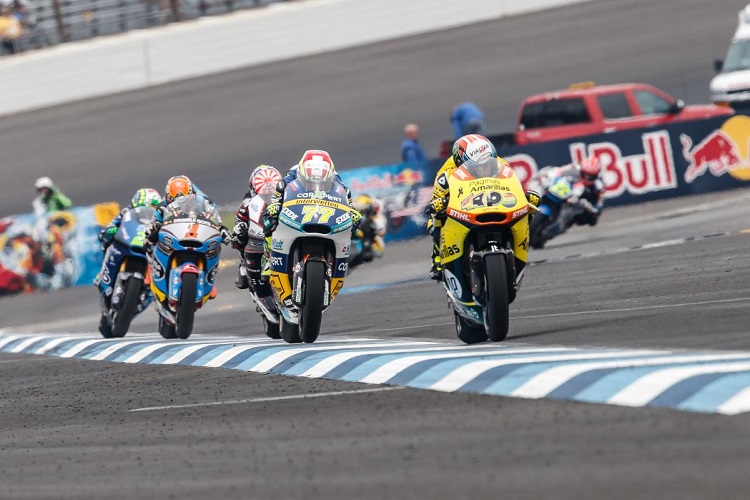 Alex Rins became the seventh different winner in the 2015 Moto2 season after claiming his maiden victory in the intermediate class at Indianapolis Motor Speedway. The Spaniard converted pole position into a magnificent win although that doesn’t tell the full story of a thrilling Grand Prix.

Following a chaotic Moto3 race featuring mixed weather conditions, Moto2 looked set for more of the same thanks to pre-race drizzle but every rider opted to start on slicks. Despite that, some riders were much more confident than others with Malaysian rider Hafizh Syahrin streaking into an early lead ahead of Sam Lowes and Dominique Aegerter.

As conditions improved, Lowes and Syahrin began to fade with their machines set-up for wet conditions but Aegerter remained a factor at the front of the pack, fighting with Rins, Johann Zarco, Tito Rabat and Franco Morbidelli for the lead. The Swiss rider enjoyed a fierce tussle with Zarco with five laps remaining, the pair swapping places regularly through the opening sequence of corners, but Rins would soon overhaul both men with a decisive late burst.

Zarco and Morbidelli capitalised on that move to snatch second and third, the Italian claiming his maiden podium finish, while Aegerter was forced to settle for fourth ahead of a disappointed Rabat. Thomas Luthi was sixth ahead of Axel Pons and Sachsenring winner Xavier Simeon with Takaaki Nakagami and Alex Marquez completing the top ten.

Sam Lowes’ hopes of keeping up his points-scoring run were dashed by a crash five laps from home.