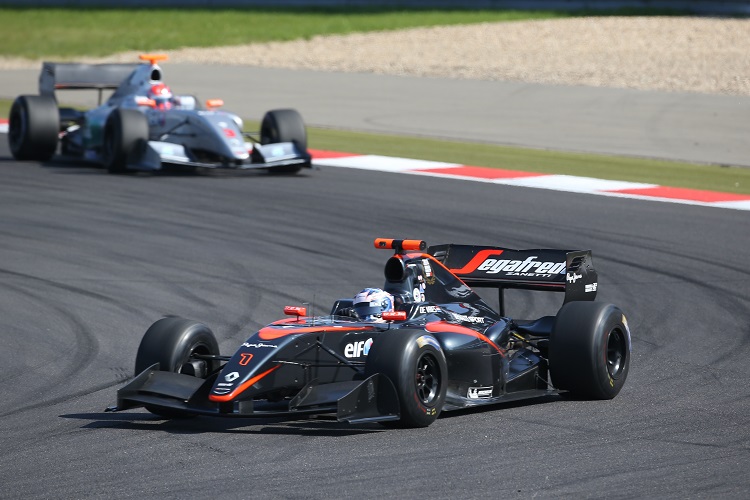 Rowland maintained his lead from pole position into the first corner but took a trip across the gravel trap exiting the chicane towards the end of the lap that allowed DAMS driver de Vries into first position, a place he would not lose again.

De Vries had to contend with two safety car periods, the first early in the race to recover Nikita Zlobin’s stranded Pons Racing machine at the chicane, and the second, which cost de Vries his more than six second advantage, to recover Roy Nissany’s crashed Tech 1 Racing machine after the Israeli driver suffered a puncture while in a battle with Andre Negrao of International Draco Racing.

Fortec Motorsports driver Rowland, who was looking to cap his season off by taking both wins in a race weekend for the first time in 2015, dropped to fourth as a result of his excursion behind de Vries, Egor Orudzhev and a slow-starting Matthieu Vaxiviere, but was able to climb back into second by undercutting Vaxiviere.

Lotus driver Vaxiviere himself had just made an overtaking manoeuvre on Arden Motorsport’s Orudzhev down the pit straight the lap before his own pit stop, but the two drivers clashed, delaying Vaxiviere slightly but causing Orudzhev a puncture that dropped him out of podium contention.

Vaxiviere ran Rowland close for the runners-up spot, but was forced to settle for third, just ahead of Strakka Racing’s Tio Ellinas, who took a watching brief in the closing stages as his two rivals ahead battled.

Gustav Malja made it a good day for Strakka by finishing fifth, holding off the late-race challenge of Jagonya Ayam with Carlin’s Tom Dillmann, while Orudzhev recovered from his puncture to secure seventh.

Beitske Visser was looking good for that final position in the points only for the AVF driver to be turned around at the final corner on the restart following the second safety car period by Lotus driver Marlon Stockinger, with the Dutch driver retiring in the pits the following lap with damage.

Dean Stoneman was an early retirement after breaking his suspension against the side of AVF’s Alfonso Celis Jr on the run down to the first corner on the opening lap, ending a relatively disappointing season for the Red Bull-backed driver.

The race marked the end of the Renault-era of the championship, and de Vries’ win gave DAMS a fitting result in their last race in the series before leaving to join the GP3 Series in 2016.