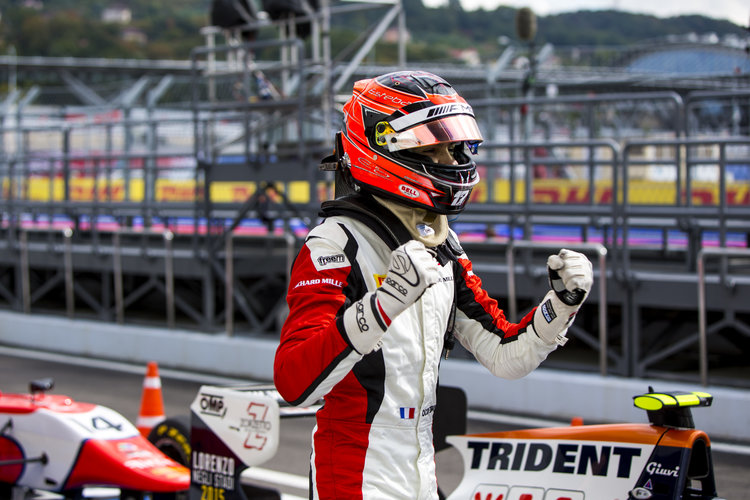 Arden International’s Kevin Ceccon will line up in third place, whilst championship leader Luca Ghiotto will only line up in seventh place and due to Ocon taking the four points for pole the Italian’s championship lead heading into the race has been reduced to just ten points.

Following rain throughout the day yesterday and over the night the track started out wet with Jann Mardenborough being the initial pace setter. As the track began to dry Ghiotto took over at the top with Seb Morris taking over the mantel soon after.

At the midway point of the session, Ghiotto was once again on top and the first driver to venture under the two minute mark, and impressively rookie team-mate Michele Beretta was in second place.

Konstantin Tereshchenko, was also in impressive form by displacing Beretta for P2 and was looking set on claiming provisional pole but was caught in traffic after posting two purple sectors.

Tuscher jumped up to the top spot, before Antonio Fuoco and then Ocon displaced the Swiss driver. Ghiotto then returned to top lapping in the 1m54s as the track carried on drying throughout the session.

Ceccon managed to find some extra pace to hold command of the timesheet; however Ocon was on fine form and managed to reclaim pole position as the chequered flag fell.

Ocon will line up on pole followed by Tuscher, which is a career best for the Swiss driver, Ceccon, Alex Palou, Mardenborough, Matt Parry, Ghiotto, Emil Bernstorff, Fuoco and Morris.