They say experience counts for a lot in motorsport, but for Felix Rosenqvist 2015 was surely the last opportunity he would have to secure the only Formula 3 title missing from his already impressive resume, the FIA European Formula 3 Championship.

Having previously won the Formula 3 Masters event at Zandvoort, the Pau Grand Prix and the Macau Grand Prix, Rosenqvist had in his targets the grand slam, and his performances throughout 2015 against a large Formula 3 field merited the title.

After leaving Mücke Motorsport at the end of a disappointing 2014 campaign that saw him only take one victory all season, he joined up with multiple championship winning squad Prema Powerteam, and immediately returned to the kind of pace that saw him challenge Raffaele Marciello for the 2013.

Of course the Swede didn’t have it all his own way, with four drivers remaining in contention for the title until the final few races of the session. Antonio Giovinazzi was Rosenqvist’s closest rival, but Jake Dennis and Charles Leclerc also had their highly impressive moments.

There were also one win a piece for George Russell, Maximilian Günther, Markus Pommer and Lance Stroll as 45 drivers represented 24 different nationalities across 14 different teams in 33 races across 11 weekends.

The Battle for the title

Ultimately the championship was fought out between four drivers in three teams – Rosenqvist and Dennis from Prema Powerteam, Giovinazzi from Jagonya Ayam with Carlin, and Leclerc from Van Amersfoort Racing. All bar four races were won by this foursome, with Rosenqvist securing thirteen of them.

The early signs of the Rosenqvist-Prema Powerteam allegiance working came at Silverstone, when the Swede took a trio of pole positions, although two of those were subsequently taken away from him due to a technicality. He took victory in the opening race of the season there, but was always on the back foot in the other two races.

The other victories at Silverstone were taken by rookies Russell, for the Carlin team, and Leclerc, with Giovinazzi securing a hat trick of podium finishes. At Hockenheim, Giovinazzi secured his first win of the season and two more top three finishes, while Rosenqvist and Leclerc won again.

Dennis secured his first European Formula 3 Championship victory in the opening race of the Pau weekend, and followed that up with a second, but it was Giovinazzi who became the first Italian winner of the famed Pau Grand Prix that weekend.

Rosenqvist secured a hat trick of victories at Monza, but in two of those he was only rewarded with half points due to race officials ending the races early due to issues with driving standards, which were evident also in Spa-Francorchamps where Leclerc and Dennis (twice) took the victories.

The Norisring was perhaps the only race weekend where Rosenqvist and Prema Powerteam were not at their best, with Leclerc, Günther (from twelfth on the grid!) and Giovinazzi taking the victories.

Dennis returned to winning ways in the opening race at the Red Bull Ring, before Rosenqvist secured victory in the second race, but Giovinazzi’s final race victory saw him awarded only half points due to extreme wet weather making the race a four lap trundle behind the safety car before being declared.

Prema Powerteam dominated in Portimao, with Dennis winning the opener before Rosenqvist led two consecutive 1-2-3 finishes in races two and three ahead of Dennis and Stroll.

Rosenqvist’s second triple victory weekend of the season secured him the championship at the Nurburgring, while Stroll led an amazing Prema Powerteam 1-2-3-4 in the first race of the championship finale at Hockenheim, before Giovinazzi secured second place in the championship with victory in race two.

Champion Rosenqvist topped off the season by winning race thirty-three of the year, while Dennis secured third in the championship ahead of Leclerc in a topsy-turvy race affected by the weather. 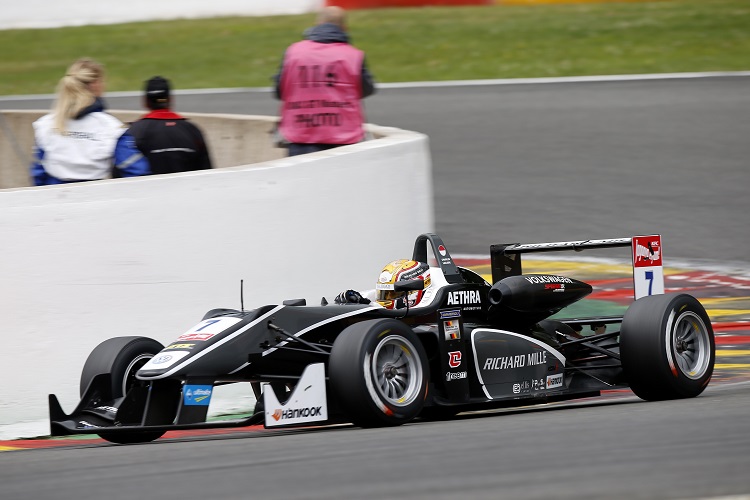 Charles Leclerc started strongly but dropped out of contention as the season went on (Credit: FIA Formula 3 European Championship)

The best of the rest

Behind the championship battle, there were a number of impressive performances from drivers up and down the field, with no fewer than fourteen drivers finding themselves on the podium.

The first signs of Stroll learning from his mistakes was at the Norisring, where he took two top-four finishes, before finishing on the podium for the first time at the Red Bull Ring. After then, he was always in contention for a good result, culminating in his maiden victory at Hockenheim at the end of the year.

Russell started the season well with his victory at Silverstone, but took until Spa-Francorchamps to secure his second visit to the podium before his final trip there at the Norisring. The British driver was extremely consistent throughout 2015, only failing to score on five occasions and retiring only once.

Alexander Albon took seventh in the championship despite not taking a victory all season for the Signature team, but the Anglo-Thai driver finished on the podium on five separate occasions, and secured two pole positions at the Norisring.

Günther came into the championship after finishing runner-up in the ADAC Formel Masters championship in 2014, and had a quietly impressive season, first for Mücke Motorsport and then for the season finale with Prema Powerteam. He swept to his maiden victory at the Norisring, and took the runners-up spot in the Pau Grand Prix.

Another Mücke Motorsport driver Mikkel Jensen secured his only two podium finishes of the season at Monza, and took a surprise pole position at Spa-Francorchamps only to find his race ended by a clash caused by Stroll that also involved Rosenqvist.

Cassidy drove at Portimao and the Nurburgring when Brandon Maisano walked out on the team at the Red Bull Ring, with Günther taking over at Hockenheim.

Two new teams made their debuts towards the end of the season, with veteran Formula 3 driver Alexander Sims returning to the series with Hitech Grand Prix, with the British driver racing in Portimao and Hockenheim, securing two top five place finishes at the latter.

The other team to make their debut were Artline Engineering, who introduced their own chassis to the championship in a bid to rival Dallara, who supply every other team on the grid. Latvian Harald Schlegelmilch and ADAC Formula 4 Champion Marvin Dienst gave the team some valuable track time over the closing two weekends of the season.

Unfortunately, despite the impressiveness of some, there were darker moments throughout the 2015 season, with driving standards being called into question on a number of occasions.

It all came to a head over the Monza and Spa-Francorchamps weekends in particular, with a few drivers receiving race bans and all drivers having a dressing down from the stewards and the FIA.

Incidents including Stroll’s frightening looking roll after a collision with Giovinazzi at Monza saw two of the three races that weekend halted and half points awarded, while Stroll was again embroiled in an incident at the following round in Belgium when he caused a three-car crash that took out team-mate Rosenqvist and Mücke Motorsports’ Jensen.

Dorian Boccolacci and Matt Rao both found themselves sitting out a race at Monza, while Stroll sat out the final race in Belgium, while Pommer also found himself disqualified at Spa for causing a collision, again with Rosenqvist.

The FIA brought in former Formula 1 racer and multiple 24 Hours of Le Mans winner Emanuele Pirro to oversee the stewarding at the events, and was praised for speaking with a cool head to the teams and drivers, and although there were still incidents throughout the year, they were not on the scale of what happened in Italy and Belgium.

Lance Stroll was caught up in a number of incidents in the early part of 2015 (Credit: FIA Formula 3 European Championship)