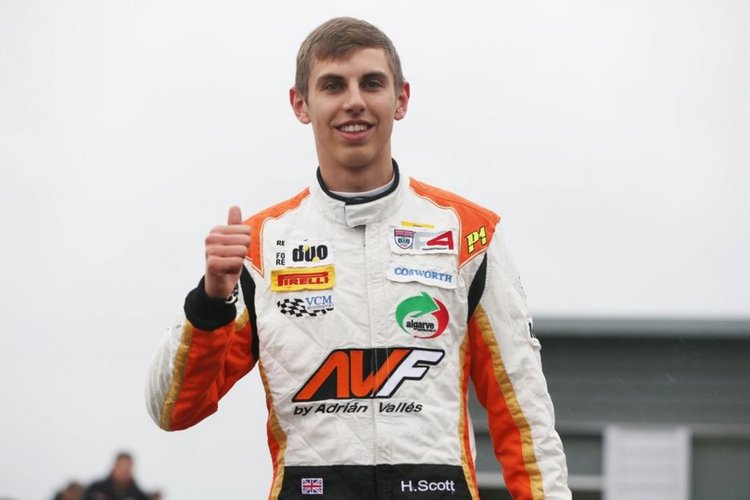 After pulling away at the front, Harrison Scott secured a dominant race one win at Snetterton with a gap of 16 seconds to the next car behind. The gap meant he was, on average, almost a second quicker than the BRDC F4 Autumn Trophy competition around the soaking track.

Having started on pole, Scott made a clean getaway avoiding the action behind. By doing so, he built up a lead of 2 seconds after only the third lap. Ben Barnicoat, who’d started fourth, had also made a good getaway, but the damp track would later see him slide off.

He recovered, but dropped to fourth as a result, promoting the drivers behind. Sisa Ngebulana had been off the pace in qualifying, but enjoyed the wet conditions, managing to move up two positions at the start, before taking another at the expense of Struan Moore.

Moore was unable to get the car hooked up and quickly fell backwads. He recovered during the middle portion of the race, but was unable to finish on the podium as he was overtaken by Barnicoat and Sennan Fielding on the penultimate lap.

Ameya Vaidyananthan had been running inside the top three at the start, but was unable to challenge for the lead and was quick to get tangled up. He ran wide at Riches and was forced to retire, putting him on the back foot early.

Scott eventually took the win from Ngebulana, while Barnicoat recovered to take the final podium place and the fastest lap, meaning he starts on pole for race two. Behind them Fielding recovered to fourth ahead of Moore.

Despite being over thirty seconds back from the leader, Al Faisal Al Zubair took the final classification, but will feel aggrieved that the race had not lasted longer, as he was catching the struggling Moore in the final few laps.