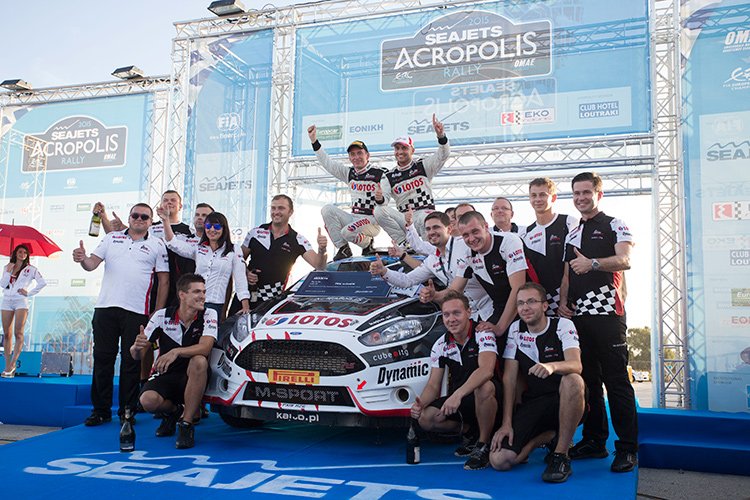 The 2015 FIA European Rally Championship lived up to expectations by entertaining fans with drama and action from the start. Contested over ten rounds it was Polish driver Kajetan Kajetanowicz who emerged as European Champion in his Lotos Rally Team Ford Fiesta R5. The Pole enjoyed a season long battle with Irishman Craig Breen who contested the series for the Peugeot Academy team in a. While both secured three wins each it was Kajetanowicz’s reliability which made the difference. The season also saw the emergence of Russian driver Alexey Lukyanuk, after impressing in ERC2 in 2014 the Russian driver also proved he can compete at the top level of the series in a Ford Fiesta R5.

The season began in January with Internationale Jannerrallye in Austria with crews having to contend with snowy conditions and slippery stages. Kajetanowicz made his championship intentions known by dominating the event from start to finish. The Pole won in Austria by over six minutes from local driver Raimund Baumschlager with Frenchman Robert Consani enjoying a good start to season with third. Alexey Lukyanuk was hampered with mechanical problems losing five minutes on the opening stage, the Russian eventually finished fourth. Craig Breen suffered the biggest disappointment as the Irishman slipped off the road on the opening stage and out of the event. Vojtech Stajf won ERC2 in his Subaru Impreza N16 beating the Mitsubishi Lancer IX of David Botka.

Domination from Day 1, Kajetanowicz took victory in the opening round – Credit: FIA ERC

The next round took crews to Latvia for Rally Liepaja and the snowy and gravel conditions once again would throw up some surprises. Lukyanuk was the first to suffer, the Russian started well by winning the first test but suffered a high speed roll on stage two putting him out of the event while Kajetanowicz retired from second place on stage five after braking a wheel on a square left. Craig Breen secured his first win of the season with a confident performance in the difficult conditions. He was over a minute and a half ahead of ERC2 winner Siim Plangi with Dominykas Butvilas in third.

From the forests of Latvia the crews traveled to Northern Ireland for the Circuit of Ireland Rally where they had to contend with narrow tarmac stages. Pre-event favourite Craig Breen took victory on his home event but didn’t have things his own way, the Irishman was embroiled in a close battle with local driver Robert Barrable and later in the event Kajetan Kajetanowicz. Barrable won the opening stage but lost it to Breen on the second test, Barrable would retake the lead at the start of the second leg but went off the road on stage 11 and out of the event. Breen took the lead but had to fend off a hard charging Kajetanowicz and despite a late spin the Irishman was able to win his home event for the first time. In ERC 2 Stajf once again beat Botka to the win while on the first round of the ERC Junior series it was Emil Bergkavist who took the win.

The Azores hosted round four of the ERC and it was once again Craig Breen who took the honours clinching his third win on the trot. The Irishman finished over a minute ahead of Kajetanowicz with Ricardo Moura in third. In ERC2 Dominykas Butvilas took his first win of the season with Stajf and Botka in second and third. British driver Chris Ingram took the win in the ERC Junior rally, his first of the season. 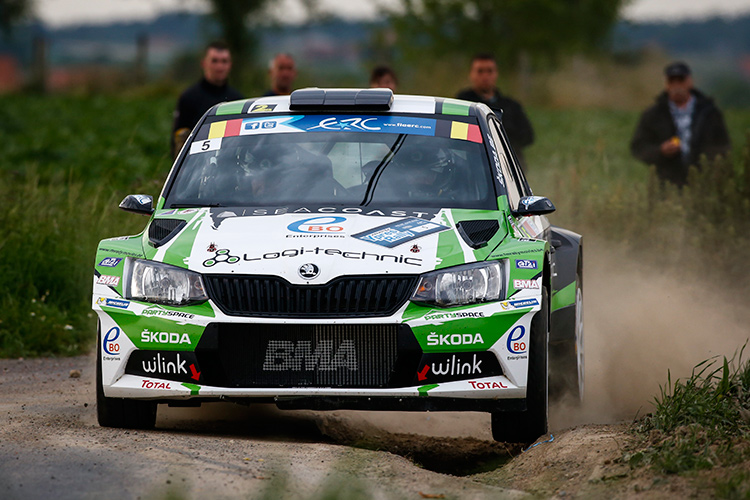 The infamous Ypres Rally in Belgium hosted round five of the series and would mark the halfway point in the championship. Belgian rally legend Freddy Loix took the top step of the of the podium in the new Skoda Fabia R5 with Frenchman Bryan Bouffier in second in his Citroen DS3 R5, local driver Vincent Verschueren took third in his DS3 R5. There was disappointment for Craig Breen who retired on SS13 with an overheating engine ending his run of wins. Hungarian driver Tibor Erdi  won the ERC2 category Mitsubishi Lancer Evolution X with Vojtech Stajf taking second. Aleksander Zawada took victory in the ERC Junior rally in his Opel Adam R2.

Rally Estonia would see the reemergence of Alexey Lukyanuk. The Russian driver had to miss the Azores and Belgian events due to budget issues and came to Estonia in a Mitsubishi Lancer Evolution X. Lukyanuk marked his come back with a win finishing 12.7 seconds ahead of Kajetan Kajetanowicz while local driver Rainer Aus took third in his Mitsubishi Lancer Evolution IX. Mechanical issues again sidelined Craig Breen as the Irishman retired on SS15 with an oil pressure issue. Ralfs Sirmacis took the win in the ERC Junior rally in his Peugeot 208 R2 with Emil Bergkvist taking second in the Opel Adam R2, the result was enough for him to be crowned 2015 ERC Junior champion. Mattias Ledin finished third in a 208 R2.

As Kajetanowicz started to build his advantage in the championship his result on the next round, the Barum Czech Rally Slin helped his bid for the title. The Pole took third place with rival Breen only managing eight after suffering three punctures during the event. The rally was won by Czech driver Jan Kopechy in a Skoda Faba R5. David Botka beat Vojtch Stajf to the ERC2 win while Emil Bergkvist took another win on the final round of the ERC Junior series.

With Breen missing the Cyprus Rally Kajetanowicz took full advantage winning the ERC class to move closer to the title. The Pole finished over four minutes ahead of Bruno Magalhaes with Jaromir Tarabus third in the Skoda Fabia S2000. Local driver Christos Demoshenous won the ERC2 category in his Mitsubishi Lancer Evolution IX.

The Acropolis Rally would host an important round in the 2015 ERC season as Kajetanowicz aimed to wrap up the title in Greece but his rival Breen won the event in 2014 and was aiming to do the double this year. Breen established a lead early in the event and by stage five the Irishman lead Kajetanowicz by 33.7 seconds, however disaster was to strike for him on the following test as his bonnet broke loose and smashed his windshield. Kajetanowicz took the lead on what would turn out to be the final stage of the event as the rest of the rally was cancelled due to bad weather. The win secured the championship for the Pole with one round to go. David Botka won the ERC2 category by 46.1 seconds from Dominykas Butvilas.

The final round of the series would see Craig Breen suffer disappointment yet again. The Irishman drove a commanding rally on the Rallye Internationale du Valais and crossed the line in first place however a mistake by his team meant he used 20 marked Michelin tyres instead of the allocated 18 on his 208 T16, and the Irish driver was given a two-minute time penalty. This dropped him to second place and meant that Alexey Lukyanuk took his second win of the season by 1 minute and 20 seconds. Local driver Olivier Burri took third in his Citroen DS3 RRC. In the ERC2 category David Botka secured the title with victory in Switzerland, his championship rival Vojtech Stajf had to settle for second after retiring on the final stage.

After an action packed 2015 season attention is already turning to next season which kicks off in Latvia in February.

By Steven Batey
2 Mins read
M-Sport Ford have officially revealed the new Ford Fiesta Rally3, which is set to go on sale to customers in time for the 2021 season.
European Rally Championship

By Steven Batey
2 Mins read
The 2021 FIA European Rally Championship is set to take place over eight rounds, with two double headers included in a bide to lower costs to competitors.