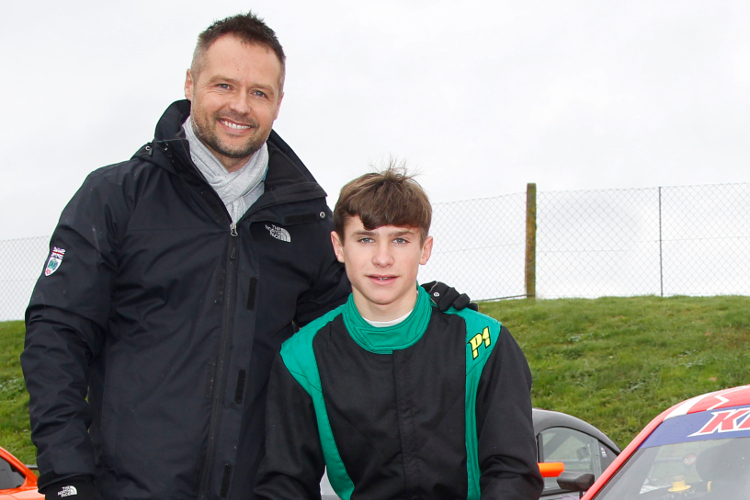 Seb Priaulx has Rookie Cup success in his sights as he prepares for his maiden season in the Ginetta Junior Championship this year, though admits he expects a “big learning curve” as he adjusts to life in the BTCC support series.

Priaulx started his Ginetta career at the end of 2015, first competing in the annual Scholarship contest at Bedford Autodrome in October, before going on to make his car-racing debut in the Winter Series at Snetterton.

For the 14 year old, it begins a motorsport career that he’s pursued for a number of years karting in his native Guernsey, having got the bug from watching his father Andy enjoy a hugely successful run in touring car and GT competition.

“I’ve loved racing since I was about eight years old,” said Priaulx. “I was watching my Dad in touring cars and then later in GT’s, and I always wanted to get into racing as soon as I was old enough, starting with karting.”

With his father racing in the British Touring Car Championship last season, Priaulx Jnr got the opportunity to see the Ginetta Junior Championship in action and says the “really close, competitive racing” attracted him immediately to the series.

“I loved watching them,” he explained. “I went to Bruntingthorpe for my first ever practice in the car with JHR Developments and I loved it, I was flat out first time. I felt I adapted to the car quite quickly.”

That brief experience was to prove useful when Priaulx tackled the Scholarship contest soon after, as he took on over sixty other rookie drivers for a fully-funded season in the 2016 Ginetta Juniors – a prize he narrowly missed out on!

“The Scholarship was fantastic,” he reflected. “It was a great event to learn about how to drive cars for the first time, and get some great advice from the instructors. I finished second unfortunately, I really wanted to win it but just put a wheel on the grass!”

Linking up with the JHR team, a deal that came about courtesy of a long-held friendship between team boss Steven Hunter and Priaulx Snr, the next step was to take on circuit racing for the first time in the Snetterton Winter Series.

Immediately amongst the top rookie drivers in the field, Priaulx impressed with three class podium finishes and a fourth place finish in the four race mini-series. On top of that, Priaulx showed his raw pace with two class fastest laps in trying conditions.

Priaulx Quickly Got To Grips With Junior Racing In The Winter Series – Credit: Jakob Ebrey Photography

Despite those positive results, Priaulx is under no illusions as to the size of the task ahead: “I haven’t really got much experience on proper circuits, so this is going to be massive for me. Getting out on tracks likes Rockingham, Croft and Thruxton is going to be a big learning curve, but I’m excited.”

Though he admits that limited budget will restrict his testing opportunities before the season, the Guernseyman is pushing himself for a strong first season: “I’d love to win the Rookie Cup. That would be an awesome achievement in my first year. I’d also like to take top ten, top six overall race results, maybe even an overall podium later in the year.

“Development has to be my main focus this season though. I’d love to get the race results, but the key is improving myself as a driver and learning the trade.”

Priaulx acknowledges that there will be some expectation on his shoulders as he follows in his father’s footsteps and enters the BTCC package, but says he is keen to make a name for himself in the sport.

“It’s going to be really weird being on the BTCC weekends and it’s actually me racing, not my Dad. I never thought I’d be the one on track with him watching,” he concluded.

“There is a little bit of pressure, as all the fans will know the name having watched my Dad last year. I’m going to block that out though, as it’s my first year of racing and I just need to do my own thing and learn my trade.

“My Dad knows what to expect in the sport though and he’s going to help me, but also let me learn for myself and learn from my mistakes. There’s a long road ahead of me and I can’t wait to get started this season.”