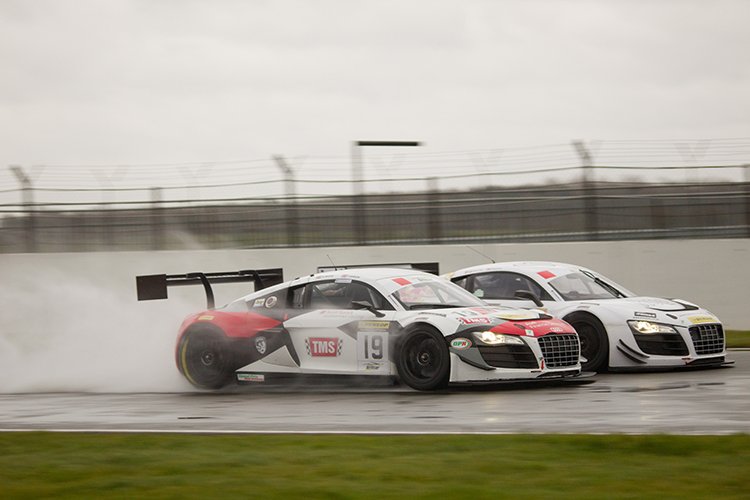 The Audi R8 LMS of Tockwith Motorsport have entered the history books as the first winners of the newly re-launched Britcar Dunlop Endurance Championship, after taking victory in a challenging first race. After taking a podium when they dipped their toes in the Britcar waters during the final round of 2015, Phil Hanson and Nigel Moore took outright victory on the Silverstone Grand Prix layout, winning by over two minutes from their nearest challenger.

Competition was stiff with a quality field of 26 entries, including seven GT3 cars plus the Mosler MT900R and rare Renault RS01 entries of Neil Garner Motorsport all duking it out for top honours.

New rules for 2016 mean that the fastest driver in each car must take the start, though some teams admitted to slowing their pro in qualifying so that the gentleman driver could take the start. The rule, brought in so that in theory, the pros will race the pros and the gentlemen drivers race their equivalents, means that for the first time National B licence holders can participate in Britcar Endurance races.

Teams played it right on the whole though so when the lights went out on the first race of the new season, the cars were at their fastest. For Calum Lockie in the FF Corse Ferrari 458 GT3 he shares with David Mason it was too fast though. Conditions conspired to catch the reigning champions out and while the field piled right into Copse Corner for the first time, the Ferrari’s back end snapped right and Lockie careened across the gravel trap, a passenger on a trip to the concrete wall surrounding the circuit.

Lockie emerged unhurt from the car after the accident, which caused significant damage to the 458 in its first ever race, but was angry with himself for the error. The marshals recovered the car under local yellows.

This left the race free to continue and Glynn Geddie left nothing on reserve as he powered the ABG Motorsport McLaren MP4-12C GT3 from 8th on the grid to the lead of the race, bypassing the HUD Motorsports Audi in second and the FF Corse 458 Challenge of Jonny Mowlem in third. The dramas for the Silverstone based Ferrari team were not over either as Mowlem was caught out by standing water around the Wing. The Challenge machine went wide, collecting the Renault RS01 of Nick Holden.

Neil Garner Motorsport returned to the track after attention from the race tape, the Ferrari wasn’t able to continue.

With the defending champions and their new car out at the first corner and the championship winning car out by the end of lap one, Silverstone was already providing upsets. Geddie led the opening two laps but as he tried for a third the GT3 car slowed on the pit straight. Adam Wilcox in the HUD Audi mis-read the situation, thinking that Geddie had slowed for the yellow flags that were still out at Copse, and slowed to follow the leader. Javier Morcillo was enjoying his return to Britcar racing after a year’s absence and took ruthless advantage of the error, blitzing past both the GT3 cars in the aging Mosler to claim the lead.

Despite the Mosler’s lack of modern aids, the Spaniard held the lead all the way through the first hour until the mandatory pit stops brought him to the pit lane. The McLaren meanwhile completed the third lap on the way to the pits and a retirement due to electrical issues in the car.

Back in third place sat the MacG Racing entry, another Britcar stalwart of old who has returned to try the championship under new management. While the team may be the same and the chassis number is too, the Ultima GTR is massively different, so much so that the MSA accepted the entry as a Taranis rather than an Ultima. Talking to the team, the only parts of the car which have survived one of the most extensive rebuild and re-engineering jobs in British motorsport, are the safety cell and the two doors. Everything else is re-worked, including the relay which failed after sixteen laps causing a belt failure which would have junked the LS7 V8 if not for the quick reactions of solo racer Jonny MacGregor.

Class 2 was a non-event. The early exit of the hot favorite from FF Corse left just the PorscheShop backed 997 RSR and a Ginetta G40 GT5 to battle it out. They finished in 17th and 14th respectively. Class 3 was a different story all together as the eight car entry worked as a group in the early stages, turning in laps and hanging on, if only barely, to the coat tails of their GT3 betters. The only blight on this rosey outlook early on was the storming progress of a car which started at the back of the grid.

Darren Nelson started his brand new car from the back of the grid to avoid problems early on. The Carnell Neilsen Racing Lamborghini Hurrican GT3 made short work of most of the cars in its way as Nelson advanced to an eventual finishing spot of second. But for the decision to start at the back of the grid, Nelson and co-driver, Nigel Greensall could well have given the raging bull its first win on British soil.

While the class three battle was initially between three, the Century Motorsport Ginetta would come from behind to take the win. (Credit: Nick Smith/TheImageTeam.com)

The class three battle was thrilling with wildly different machines all battling for the top spot. Porsche battled Chevron who battled Lotus. All through the first hour of the race the sometimes long range grappling and sometimes close in dogfighting continued with the Hofmanns of Henley Lotus Europa in the lead as cars made their way to the pits for the mandatory 90 second pit stop.

Not bad at all for a road car turned racecar which was sold as the softer option to the VX220, with which it shares a platform.

In the pits, most of the cars carried out a driver change with only the Taranis, Geoff Steel Racing’s #13 BMW in class 4 and the Synchro Motorsport Honda Civic Type-R of Alyn James opting to run with only a single driver, though Ollie Hancook sat the race out in the #88 Century Motorsport Ginetta leaving the full race to Ruben Anakhasyan. First to the lane was the GT3 BMW Z4 of Ian Lawson for ING Sport. One of the few teams and crews in class 1 to have proper race experience with their cars, the Endurance Racing Series refugee did a solid but uninspiring first stint. Once Kevin Clarke was on board that all changed.

The BMW specialist hit the track just as the weather took a turn for the worse, which given the continuing light rain and high winds of the morning and early afternoon, spelled trouble. Clarke opted to play it safe and bring the car home in a solid fifth place overall, the last man in a solid block of class 1 runners.

No one appeared to tell the eventual race winner that rain affects grip though. Nigel Moore climbed aboard the Audi with fifty-five minutes left on the clock and headed out in to rain which was rapidly becoming torrential and arriving horizontally with the force of the wind. Given the conditions, everyone expected a docile end to a good race but Moore had other ideas and let loose a barrage of fastest laps, cementing his lead of almost a lap over the Hurrican when the chequered flag was shown thirty-two minutes early, accompanied by red flags as the circuit became un-drivable.

Of course the deteriorating conditions helped as drivers backed off with poor visibility and little idea of where traction could be found on the Grand Prix circuit on any given lap.

So class one and overall victory went the way of Tockwith Motorsport, earning the new form of Britcar a rare mention as the lead item in Audi Sport’s weekly news round-up along with full points and the biggest trophy. The Lamborghini came in a distant second while car owner and ‘amateur’ driver Manuel Cintrano brought the Mosler in for a podium on their Britcar return, just off the lead lap.

Class 3 came in next and while the race was competitive throughout the conditions worked to split the pack towards the end. Surprisingly it was not one of the cars which battled early on which claimed the win but the Ginetta G55 GT4 of Century Motorsport and Steve Fresle and newcomer Jacob Mathiassen who took the victory. Second went to the SG Racing Porsche 911 997 for the father and son Cunningham crew while the Lotus continued the dads and lads outing to the podium for the Randalls.

A depleted entry in class 4 saw all three runners on the podium. The Atkins Motorsport with Snows BMW BMW M3 GTR looked untroubled throughout, Sam Allpass and Lee Atkins sharing the driving. Second in class was the Geoff Steel Racing entry, though the Atkins Motorsport entry is run by the GSR outfit, for lone wolf Del Shelton, who finished only 0.315 seconds behind the GTR spec BMW despite running an older version of the M3 and having not raced for six years.

The SICL.com SEAT Leon Eurocup TCR machine took third in class, the legacy of a silly mistake at the start. Ashley Woodman dropped from his grid spot on the formation lap and tried to retake position before the start. That landed him with a stop and go penalty which left he and Keith Hemsworth with a mountain to climb.

Class 5 was up next where Alyn James made best use of his wet weather experience from the 2015 Race of Remembrance at Anglesey, where the Civic Type-R battled conditions equally as wet to gain victory on debut. The new machine, which will race again at the Hankook 24H Silverstone, is now two for two with Glen Finn and Richard Burrows second in class in a Ginetta G40. The podium for the slowest class, nominally at least, was rounded out by the MINI Cooper JCW of Alex Craven and Adam Bewsey.

The problems in class 2 left it the slowest of the five classes as well as the smallest. Ian Heward and Darrelle Wilson in the PorscheShop 911 took the victory in class ahead of the stunning in both sound and vision Ferrari 360 of WDC Racing. Of course the Ferrari 458 Challenge failed to make the finish after its accident on lap 2 but was still classified as third in class.

Britcar will return to action at Snetterton on 7th-8th May, with both the Endurance and the Production championships taking to the track. Before then, the all-new Dunlop Prototype Series kicks off on the Silverstone Grand Prix layout this weekend with two one hour races in support of the 24H Silverstone.