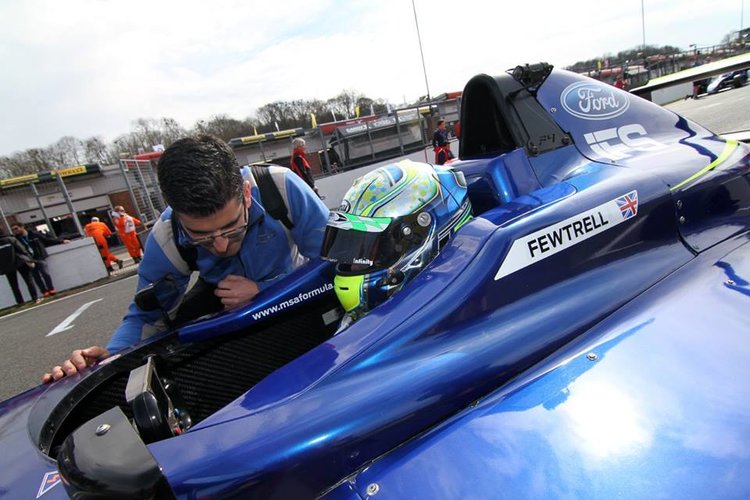 Carlin driver Max Fewtrell has taken the points lead in the MSA Formula Championship as he cruised to victory in the final round of the weekend at Donington Park.

His race was fairly uneventful as a number of his rivals ran into issues. There was delayed start after Zane Goddard stalled on the first installation lap. After another warm up lap Fewtrell made a good getaway from pole, quickly extending his lead. With no safety cars, he found that he came under little pressure until the flag dropped.

Not everyone had as clean a race as him. The carnage behind was caused by Devlin DeFrancesco as the Canadian twitched his back end running over the grass, rejoining after the old hairpin. With wet tyres the Carlin driver spun, narrowly missing everyone as they streamed either side of him.

Back at the front, the quick starting Ross Martin was now holding up Sennan Fielding, this allowed Carlin driver James Pull to catch and overtake after race two winner Fielding made an unsuccessful dive down the inside of Martin.

Further back the TRS Arden pair squabbled for track position. Jamie Caroline saw the gap and jumped both of them while they were distracted with each other into turn one. Apparently, the Ardens didn’t learn their lesson as Harry Hayek took advantage a few laps later.

Fewtrell continued to set fastest laps as he built up a sizable gap over second place Luis Leeds, who was himself pulling away from the pack. The Australian’s competitiveness will be promosing for his championship hopes after a number of consistent points finishes

Pull was determined not to lose ground in an incredibly close championship and a few laps after taking fourth was already attacking the Fortec Motorsports car of Ross Martin. Despite the pressure, Martin kept the distance, recording his first MSA Formula podium.

Fewtrell’s win put him ahead in the championship as Petru Florescu left the weekend with minimal points. Leeds and Martin completed a closely fought podium with Pull only managing to collect fourth.

Behind the breakaway quadruple, Fielding picked up a vital fifth, keeping his championship hopes alive as race one winner Alex Quinn suffered after a poor start, eventually crossing the line in sixth ahead of Caroline.