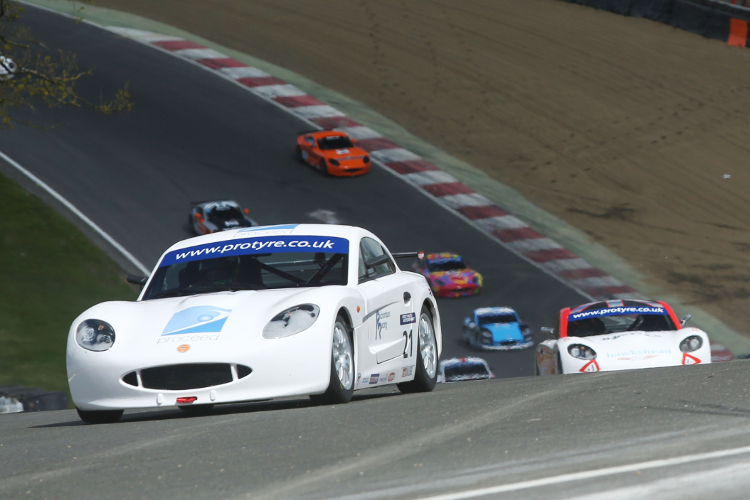 Andrew Richardson made a strong return to racing last weekend with a top five finish in the Ginetta GT5 Challenge at Brands Hatch with family squad Richardson Racing.

With a deal in place with Alex Toth-Jones for selected events this season, the team decided to enter the opening rounds of the season to gain more experience with its new Ginetta G40.

For Richardson, it marked a return to competitive action for the first time in two years, but the former Michelin Ginetta GT4 Supercup race-winner was quickly up to speed.

Qualifying a superb second on the grid, Richardson would bring the G40 home in fifth place in the opening race – his podium push hampered by the lack of worn wet tyres, his preferred choice in the conditions.

That would be the best of Richardson’s weekend however, with an unfortunate incident on the opening lap of race two ending that encounter on the spot – with hidden damage from that causing a second DNF in the final race.

“Although the end results weren’t what we hoped for because of the incident in race two, there are a lot of positives we can take away from this weekend,” said Richardson.

“While other teams have been testing over the winter, our decision to enter the Ginetta Challenge was taken relatively recently, so we went to Brands Hatch with our focus on learning as much about the car as possible.

“We did well to qualify second on the grid and fifth in race one was a decent start, but we knew that the pace was in the car to fight for victory in race two. However, when someone else had a moment and collected me, it was unfortunately the end of our challenge.

“To show the pace we did this weekend is very encouraging and whilst we didn’t manage to get to the top step of the podium this time, we’ll work hard to do it with Alex when he gets behind the wheel.”

Toth-Jones will make his Challenge debut next time out at Thruxton (07/08 May), when the Challenge joins the support bill for the Dunlop MSA British Touring Car Championship.