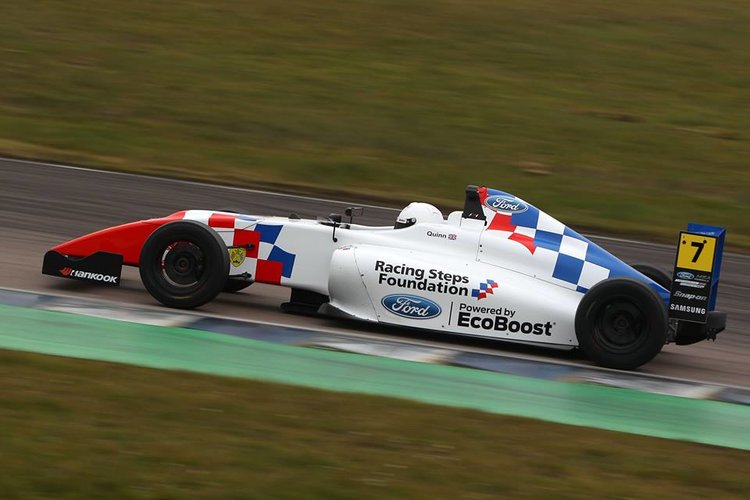 Despite being only the second MSA Formula race of his career, Alex Quinn proved he’s prepared for a full championship fight after a strong qualifying culminated in pole for the Racing Steps Foundation rookie around the Donington Park circuit.

Quinn was immediately at the sharp end of the grid as his provisional lap saw him only a few tenths off Devlin DeFrancecso‘s benchmark. The Carlin driver repeated his Brands qualifying effort by showing pole position promise in the early half before quickly falling back as the drivers found the limits of the cars.

Other than De Francesco though, the Carlin’s were notably off the pace with championship leader Petru Florescu eventually being called into the pits with a black and orange flag. He would rejoin but was unable to get back up to speed, meaning that he’ll start at the back of the grid.

As the session progressed, Quinn continued to improve, eventually going top. There he would stay for the second half of qualifying as the amount of drivers improving eventually slowed, leaving the rookie on top with thirty-seconds still to run. Afterwards, he described himself as “nervous”, going into the session, but soon “found confidence with the machine.”

Behind the Fortec Motorsport driver, Luis Leeds will line up second in race one after an incredible final lap that saw him jump half a dozen places up the grid despite being unusually slow for the majority of the session.

The only other two drivers to find time in the dying minutes were Max Fewtrell and Billy Monger. Fewtrell had been towards the back for a large portion of the session before a late spurt saw him challenge for pole as him and Monger trade sector times.

A good day for the rookie drivers eventually saw Ross Martin join Quinn towards the front. The TRS Arden driver had kept out of trouble and will be hoping for a strong race from fifth after a double retirement at Brands put pay to his weekend hopes. Meanwhile, James Pull clawed his way up to sixth, pushing team mate DeFrancesco down to seventh alongside the driver that had been an early pole contender, Sennan Fielding.