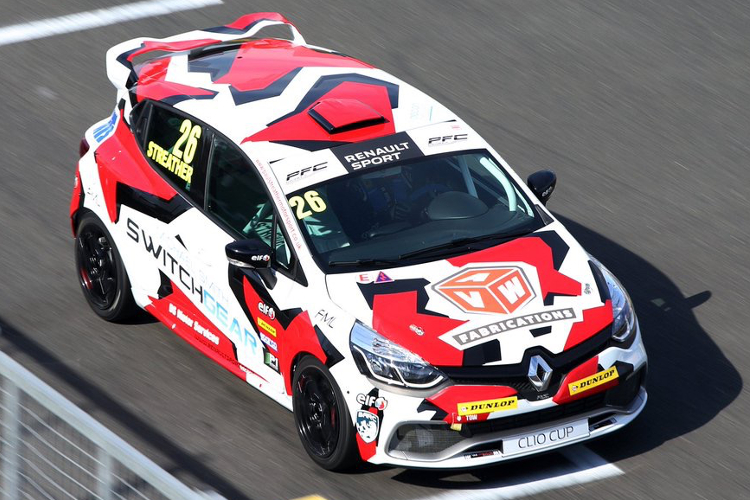 Paul Streather held off a host of more experienced Renault UK Clio Cup rivals to score a sensational maiden victory in the opening round of the 2016 season at Brands Hatch.

Ant Whorton-Eales had led the way in qualifying earlier in the day, but a technical infringement found post-session led to his exclusion, promoting Daniel Rowbottom to an unexpected pole position ahead of Streather.

The top two headed side-by-side into Paddock Hill bend for the first time, with Rowbottom just losing the back of his Team EcoMotive on the tighter inside line, sending him across the track and into the gravel trap.

The commotion bunched up the pack behind, with Dan Zelos losing out as he got spat out the pack and into the stopped Rowbottom in the gravel – the resulting damage ending both their races on the spot and bringing out the safety car.

The first corner chaos shuffled up the pack, with Lee Pattison emerging in second place ahead of Mike Bushell and Paul Rivett – those two swapping places at Clearways just before the safety car emerged – with Charlie Ladell and Max Coates completing the top six.

Rivett forced his way back ahead of Bushell shortly after the restart and went on to join Pattison in pursuit of Streather as the race developed, with the top three separated by less than seven tenths of a second at one stage.

Streather held on though to take the victory for Finesse Motorsport, with Pattison finishing half a second shy to record Team Cooksport’s best result so far in their Clio Cup career. Rivett completed the podium meanwhile ahead of Bushell, the top four split by less than a second.

Ladell and Coates maintained their positions to the end to round out the top six, the latter taking the Graduate Cup win on his championship debut, with Josh Price seventh ahead of Ant Whorton-Eales, who starred with his drive from 23rd to eighth.

Alongside Rowbottom and Zelos, Peter Felix also failed to make the finish after coming to grief in the early stages.