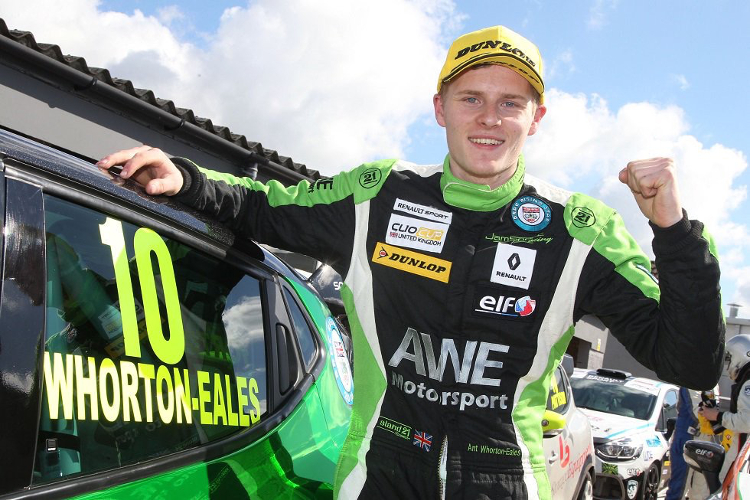 Ant Whorton-Eales has climbed to second in the Renault UK Clio Cup championship standings after completing his Donington Park double with victory in a close-fought second race.

Paul Rivett retained his points advantage meanwhile with a historic 100th podium finish of his Clio career in second, while at the other end of the spectrum Charlie Ladell secured his first.

It was erstwhile points leader Lee Pattison that initially led the race after outpacing pole-sitter Whorton-Eales off the line, with the quick-starting George Jackson initially rising to third.

That was short-lived however as Paul Rivett squeezed past into the Old Hairpin, with an identical move in front seeing Whorton-Eales dispatch Pattison for the race lead.

Later in the lap, Pattison dropped a further position as Rivett slipped around the outside at the final chicane – and two laps later it went from bad to worse as the slightest of contacts with Ladell sent Pattison spinning off.

Ladell was able to recover in third however, with Jackson’s early challenge fading as he fell back to seventh, before taking a drive-through penalty as one of four drivers to jump the start.

Whorton-Eales had established a one second advantage at the front however and wouldn’t be troubled in the final stages en-route to victory, with Rivett a clear second behind.

Paul Streather almost deprived Ladell of his maiden podium, the duo running side-by-side for most of the final lap, but the WDE Motorsport man fended him off to take third.

Fifth overall was Max Coates as he continued his 100% winning record in the Graduates Cup, with Mike Bushell and Daniel Rowbottom close behind.

One of the drives of the race came from Senna Proctor, who rose from the back of the grid to eighth in his hastily repaired Team Pyro Clio following his roll in race one.

Josh Price and Rory Collingbourne completed the top ten ahead of Paul Plant and Luke Kidsley, while taking the Masters Cup victory was Craig Milner on his return to the series.

An early casualty in the race was Rory Green following first lap contact with Darren Johnson, while a tough outing for Ciceley Motorsport saw both Ollie Pidgley and Dan Zelos retire with mechanical problems.