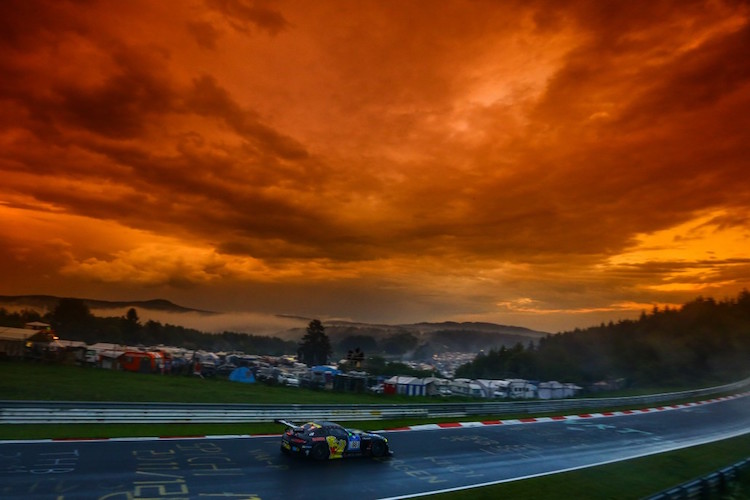 The 2016 Nurburgring 24 Hours got underway in Germany and before the teams even had the opportunity to get themselves comfortable, rain and hail came to heavily disrupt running for almost three hours. Even with this, and an erstwhile leader hitting serious trouble, the #88 Haribo Racing Mercedes AMG finished the first third of the race in the lead.

Piling into the first corner was typically as hair-rising as could be expected at the Nurburgring with 159 or so cars all taking on the green hell. Out of the melee came the pole sitting Black Falcon Mercedes of Maro Engel with the #18 BMW M6 of Schubert Motorsport with Jorg Muller making sure Engel didn’t get everything his own way.

Behind them would be the #8 and the #88 Haribo Racing Mercedes, sharing a line-up of Uwe Alzen, Lance Arnold, Maxi Gotz and Jan Seyffarth.

The battle would proceed on for a number of laps with the front runners starting to hit the slower traffic at the end of the first couple of laps. Engel would hold out for a while at the front but when the rain came with 30 minutes gone no one was safe and with some sections of the Nordschleife bone dry and others completely deluged it was a challenge to all the teams as to what was the best strategy to deal with the conditions.

The action was fierce in the lead SP9 class with Black Falcon fending off the competition (Credit: Gruppe C/Nurburgring 24 Hours)

Indeed, the rain quickly turned to hail on some of the extremities of the circuit and with the ice laying so thick that you’d be hard pushed to distinguish from snow, drivers would quickly discover that they would either hit the barriers at Aremberg (or other corners in that local area) or grind to a halt and realise that they didn’t have the grip to get up the hill and back to the pits.

That would mean the red flag was called for with just 50 minutes of the race gone, and by the time the weather had eased enough for the cars to go back out – albeit behind a safety car – almost three hours of the race had elapsed.

Amongst the casualties, including the #911 Team Manthey Porsche which suffered a crash while under the control of Nick Tandy, the #18 Schubert BMW, the #30 HTP Mercedes and the #007 Aston Martin Vantage would have offs ranging from minor to slightly more damaging.

As the race restarted, with four formation laps behind the safety car, the #23 ROWE Racing BMW wouldn’t get away from the grid and would be pushed into the garage for a look over.

When the track finally went green, still under very heavy rain, coming out of the green hell unscathed and in the lead was the sister ROWE BMW and Frederic Vervisch in the #2 Team WRT Audi R8 LMS with the Schubert Motorsport car slipping down to fifth with the two Haribo Racing cars filing in behind the Schubert machine.

The Schubert Motorsport BMW has battled through extreme conditions on the Nurburgring (Credit: Gruppe C/Nurburgring 24 Hours)

After that, the conditions started to improve and while there were a few offs that caused localised code 80s across the Nurburgring, there were no major issues until the Schubert car – which had inherited the lead following a round of pitstops – saw its engine explode spectacularly with the smoke reducing visibility to zero for the cars behind. That nearly caught out the second placed #88 which almost didn’t see the BMW in time and had to take to the grass in avoidance.

As the first eight hours ended, the #8 – which was running in second – also experienced mechanical difficulties and found itself pushed into the garage.

That didn’t stop the Mercedes domination at the front though, with the #88 leading from the pole sitting Black Falcon Mercedes with the #30 HTP Motorsport car in fourth and the sister HTP car following in fifth. Sandwiched between those four in third place was the #912 Manthey Porsche 911 GT3R with Richard Lietz behind the wheel of that car.