The 84th running of the 24 Hours of Le Mans gets underway this weekend, and in the run up to the race The Checkered Flag is previewing each class, this time the focus is on the premier GT class – GTE Pro.

Obviously the biggest news is the return of Ford after their success 50 years ago. With the two cars that are running full-time in the FIA World Endurance Championship being joined by the two IMSA WeatherTech SportsCar Championship entries, the blue oval is going all out for glory in this their anniversary year.

There’ll be a fight for US honour though as Corvette Racing bring their IMSA entries to La Sarthe as well, with the Taylor brothers – Ricky and Jordan – coming along as third drivers.

However, the European teams won’t be going down without a fight and with AF Corse bringing their new Ferrari 488 GTEs, Aston Martin Racing bringing an updated Vantage and Porsche bringing a trio of their reliable Porsche 911 RSRs, the Americans certainly won’t have it all their own way.

AF Corse can never be ruled out (Credit: Adrenal Media)

The biggest question mark over AF Corse isn’t the drivers, even Le Mans debutant Alessandro Pier Guidi is a heavily experienced GT racer in the Blancpain GT Series amongst others, it’s instead the reliability of the 488 which has been temperamental to say the least.

While the #71 has taken two wins in a row – propelling Rigon and Bird to the top of the drivers championship – the #51 has suffered numerous failures and issues, to the extent that at the Le Mans Test Day the car missed the official photograph as it was having an engine change.

Corvette are coming to La Sarthe off a number of good results in America (Credit: IMSA)

With the car now into its third season of development, the C7.R is a known quantity for the team now and that knowledge has allowed them to carry on fine-tuning the All-American muscle car.

With a 1-2 finish at the Daytona 24 Hours and a win for Oliver Gavin and Tommy Milner at Sebring, the team already have a good 2016 record when it comes to endurance racing and with a bit of extra American competition they’ll be fired up to add the French classic to this year’s trophy cabinet.

Adding Ricky and Jordan Taylor to their line-up gives an extra bit of muscle to the crew and with Ricky racing for the factory team for the first time, they’ll be keen to have a good result. 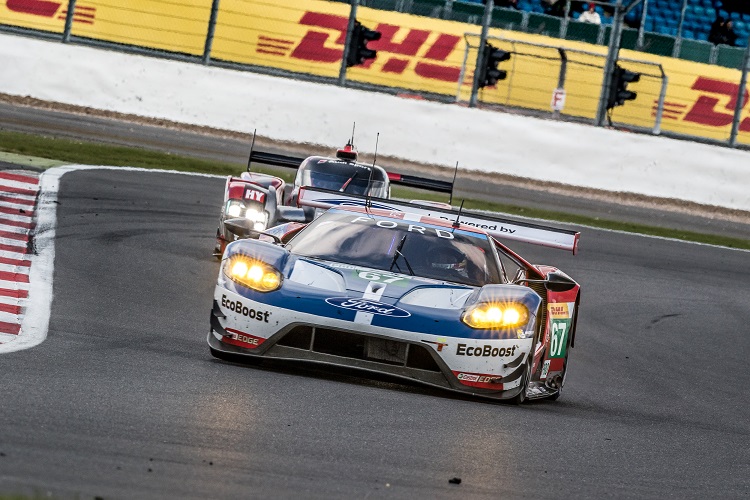 The WEC crew will be hoping to build on a solid start to the year (Credit: Adrenal Media)

Arguably one of the most experienced driver line-ups in the field, the first of two Ford GT teams will be looking to build on their decent results so far in the FIA WEC and claim another victory 50 years after the original Ford GT managed the same.

The #67 has a fourth and a second to its name, putting it best of the rest behind Bird and Rigon’s Ferrari in the drivers points table, and for a car that has only raced in Europe since the start of the year, those results must have exceeded everyone’s expectations.

For the #66 performance has also been promising, but a big crash at Spa coming out of Eau Rouge robbed the team of vital track-time prior to the 24 Hours. That said, eighth in class following the Le Mans Test Day gives them a good basis to build on for the race proper.

12th for the #67 possible wasn’t what they would have wanted but 74 completed laps has gained them valuable experience.

The American cousins coming over for a European holiday, the pair of IMSA WeatherTech SportsCar Championship Ford GTs have also had a decent time of it in the first half of the American season, but results haven’t been as positive as would have been hoped for.

The #68, which has Hand and Muller for the full season, has yet to claim a top five finish with sixth place at Laguna Seca the best finish so far this year. Apart from a win at Laguna Seca, results for the #69 have been much the same but will be hoping some of the luck their UK counterparts have been enjoying will rub off on them.

That said 13th and 6th at the Test Day for the #68 and #69 respectively has given them a good base for development for the 24 Hour race.

Dempsey-Proton Racing haven’t had the year they’d have wanted to so far this year (Credit: Adrenal Media)

Hamstrung by a car in between development years – a new 911 is coming to fit with the 2017 regulations – the team haven’t really been having the best time of it in the WEC. With Leitz, Christensen and Eng they have a driver trio that could conquer any race but issues with the 991 evolution of the Porsche GTE machine have stopped any good results.

A ninth and fourth in the first two races of the season proved to be mediocre at best but the car is an outside chance of at least a podium if they can keep clean and consistent like they have in the past.

14th and last in class on the test day doesn’t suggest great things are going to happen though.

Risi Competizione are an experienced outfit and can’t be counted out for at least a podium (Credit: Craig Robertson/SpeedChills.com)

The legends of Ferrari racing in America, Risi Competizione can never be counted out when it comes to Le Mans and with a return for the first time in years with a brand new machine and a dominant driver line up.

That said, their experience at Daytona and Sebring will put them in a good position for the race, and a ninth place at Test Day isn’t too shabby either.

While not having a full-season WEC programme this year, the Porsche factory effort this year instead has a very American tint to it with the #91 being the same trio that has taken to the IMSA Championship this year with one win to its name at Long Beach.

However, like the Dempsey-Proton machine, there are issues with the Porsche itself which is stuck in a development funk, that said with two of last year’s overall winners in the sextet they can’t be ruled out if they can keep the car on the pace.

Indeed second and third in the Le Mans Test Day is a sign that on their day they will always have a chance of at least a podium.

Aston Martin Racing will be looking to bring British pride to the 24 Hours (Credit: Craig Robertson/SpeedChills.com)

Both cars have a podium and both cars have retired – in what is probably the most polar opposed set of results of any of the GTE Pro teams – Aston Martin Racing have distinctly middling form as they come to La Sarthe.

However, with the two teams packed with top drivers they can’t be ruled out from gaining a podium especially with Jonny Adam – a double race winner this year in the British GT Championship – and Darren Turner marshalling the two crews.

A move to British Racing Green liveries and Dunlop tyres mean there is a lot of change in the team, could it lead to a victory? Only time will tell.