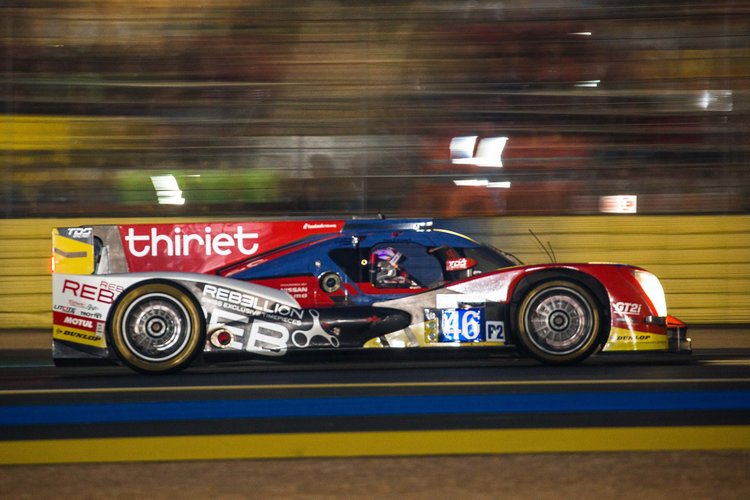 The 14th hour of the 24 Hours of Le Mans ended with both Toyotas leading the field.

An earlier than expected pit stop for the #2 Porsche 919 Hybrid of Marc Lieb put Anthony Davidson through into second position in the #5 TS050.

At the end of the hour, Kamui Kobayashi led Davidson in the Toyota one-two with Lieb trailing the pair by around 40 seconds.

Porsche made its 17th visit to the pits before Toyota had carried out its 16th service, in the hope of reversing Toyota’s accrued advantage later in the race.

As a result, Porsche dropped behind both TS050s but will move ahead once the Japanese marque brings its cars in because it did not lose a lap during its 17th stop.

The #8 Audi R18 continues to run fourth, three laps off the pace, while the sister #7 car lies fifth after mechanical problems struck both Rebellions.

In LMP2, Nicolas Lapierre relieved Gustavo Menezes of his duties aboard the Signatech Alpine-Nissan, and retained the lead through the next hour of running. The French driver crucially made his 19th pit stop (with 10 minutes to go before the hour mark) without losing first place to the Thiriet by TDS Racing ORECA of Rio Hirakawa. That meant Hirakawa would have to pit from second position, thereby increasing Lapierre’s lead.

GTE-Pro was led at the interval by Giancarlo Fisichella who continues to push the Risi Competizione Ferrari 488. Fisichella is still being chased by the #68 Ford GT, but the #69 blue oval surrendered its place on the lead lap with a quick trip to the garage at the start of the hour. Scuderia Corsa remained at the head of GTE-Am with Bill Sweedler driving the Ferrari 458 Italia.