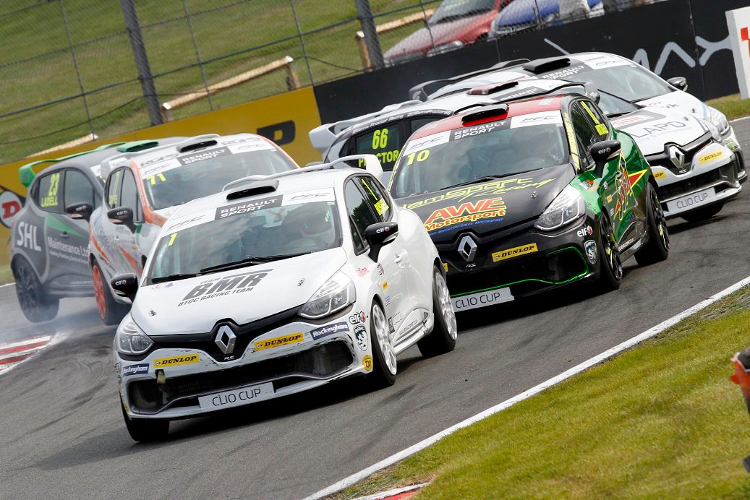 Mike Bushell emerged victorious from a fraught battle with Ant Whorton-Eales to take his opening victory of the 2016 Renault UK Clio Cup season, and with it the championship lead from Paul Rivett.

While Bushell converted pole position into victory at Oulton Park, it was far from simple for the 2014 champion as he traded the lead with Whorton-Eales throughout the contest.

A superb launch from Whorton-Eales sent him from fourth on the grid to the race lead heading into Old Hall for the first time, with Bushell having to battle to keep second from Senna Proctor.

Rivett joined them in a four car train for the lead in the early laps, with the first change at the front coming on lap three at Bushell dived down the inside into the Hislops chicane.

The decisive moments of the race came two laps later, starting with Whorton-Eales storming down the inside of Bushell at Cascades to take the race lead back.

Bushell immediately fought back ahead into the Island hairpin, with the two drivers expressing their frustration post-race at the robustness of their rivals moves.

Behind them at the hairpin, contact between Proctor and Rivett lost them both time and opened the door for Max Coates to dive down the inside of both for third position.

The podium positions wouldn’t change for the remainder of the race, with Bushell edging clear to take a three second victory from Whorton-Eales, while Coates took a maiden outright podium in third.

Proctor held off some late pressure from Charlie Ladell to take fourth, while Lee Pattison fought back from a frustrating qualifying session to complete the top six ahead of Rivett.

Daniel Rowbottom secured eighth ahead of Josh Price and Luke Kidsley, with Rory Green eleventh – a position he gained after a battle with Jake Giddings ended with the latter hitting the tyre barriers.

Giddings recovered to take the chequered flag in nineteenth, one place behind Dan Zelos who once again couldn’t show his true pace as his run of bad luck continued.