Caroline looks back on promising weekend of podiums 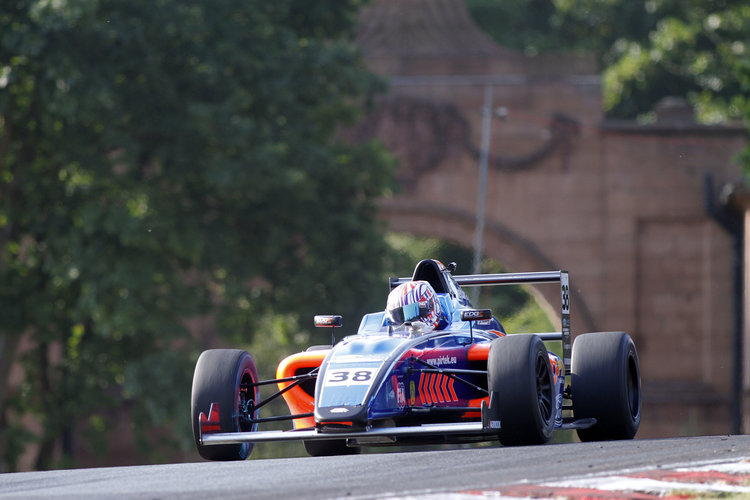 Jamie Caroline has described the recent weekend at Oulton Park with reserved optimism, saying he “Hoped to be able to challenge for [his] first win.” The Jamun Racing driver picked up two podiums in the F4 British Championship.

This season hasn’t gone as planned for the Pirtek sponsored driver. After picking up the Ginetta Junior title last year, many expected him to following in the footsteps of Lando Norris, becoming one of the most competitive in the series, though it so far hasn’t worked out that way.

His double podium at Oulton Park saw him pick up only his third and fourth podiums of the year, as a result he sits eighth in the championship, just five points off rookie leader Alex Quinn; Despite this he will be frustrated with the 63 point gap between him and series leader Petru Florescu; on 158 points.

“It’s good that we were the only driver who was really able to take the challenge to the Carlin men this weekend in both qualifying and the races,” he reflected.

“Oulton Park is a circuit where it is was always going to be harder to overtake compared to the first three rounds, but I managed to make up a place in two of the races and it was just unfortunate that we had a mechanical failure in the other.

“To come away from the weekend with two more podiums is pleasing on one hand, but on the other, I hoped to be able to challenge for my first win of the year this weekend and am slightly disappointed that I didn’t manage to achieve it.”

The only major downside came in the second race, where a clutch issues saw the seventeen year old crawl the second half of the first lap, eventually retiring and losing his chance at another strong points finish.

“However, it’s good points on the board and I’m looking forward to fighting at the front again when we go to Croft in a few weeks.” he concluded.

Despite his strong weekend, Caroline leaves one position lower in the championship as Canadian Devlin DeFrancesco benefited from Carlin’s almost dominant surge.