It was also his Prema Racing’s team maiden triumph in the championship at just their third event after entering the series at the beginning of 2016.

Starting from pole, Giovinazzi was slow away and lost a number of places off the line, but a multi-car accident that eliminated five drivers meant the safety car was deployed before even half a lap was completed at the inaugural race around the Azerbaijani circuit.

Pierre Gasly tipped championship leader Norman Nato into a spin heading around the first corner, and as Gasly was slowed by the incident, he was hit from behind by Sergio Canamasas, who ended up on top of the rear of the Prema Racing car.

At the same time, Alex Lynn and Marvin Kirchhöfer collided, eliminating both, while Lynn’s DAMS team-mate Nicholas Latifi was also out of the race after being caught up in the incident.

Nobuharu Matsushita took the lead at the start ahead of Raffaele Marciello, with the duo switching places on consecutive laps down the 1.4-mile straight on the restart, but it was not long before the safety car was redeployed as Philo Paz Armand crashed again, with drivers taking their mandatory pit stops at this time.

The second safety car had not long left the circuit when it was needed once more when Arthur Pic and Artem Markelov came together at turn five, with the Rapax driver eliminated on the spot, while the Russian Time driver only made it through a few more corners before retiring himself.

Marciello led the field at the third restart ahead of Nabil Jeffri, who had not made a pit stop in his Arden International entry, but Matsushita made a mistake while attempting to pass Jeffri, which gave Oliver Rowland the momentum to pass both drivers and move into second for MP Motorsport.

By lap twelve, Giovinazzi at this point had moved himself into third position, and two laps later he moved ahead of Rowland and began to close the gap down to Russian Time’s Marciello at the front.

Giovinazzi caught Marciello quickly, and passed him at the beginning of lap eighteen to assume the lead, and then pulled away at the front only to find the safety car deployed for a fourth time when the recovering Nato made an opportunistic but unsuccessful overtake on his Racing Engineering team-mate Jordan King, breaking the Frenchman’s front suspension.

There were just two laps remaining when the safety car exited the track again, and despite a massive lock-up of his tyres into the first turn on the restart, Giovinazzi just about held onto the lead, and then consolidated his position up until the chequered flag to take the victory.

Sergey Sirotkin secured second place as he out-dragged Marciello on the run down to the finish line on the final lap, the two separated by just over a tenth-of-a-second at the flag, with the advantage going to the ART Grand Prix driver.

Rowland found himself down in fourth at the end ahead of Campos Racing’s Mitch Evans, while Matsushita could only claim sixth despite having led in the early stages of the race.

Sean Gelael was seventh for Campos ahead of Daniel de Jong of MP Motorsport, who will start Sunday’s Sprint race in Azerbaijan from pole position as a result, while the top ten was completed by Trident’s Luca Ghiotto and Rapax driver Gustav Malja.

Jimmy Eriksson had been inside the top ten with just a couple of laps remaining, but a penultimate lap collision with King eliminated both drivers, meaning that the Swede and his Arden team are still seeking their first points of the campaign, with the incident meaning only ten drivers finished the race, with them all scoring points. 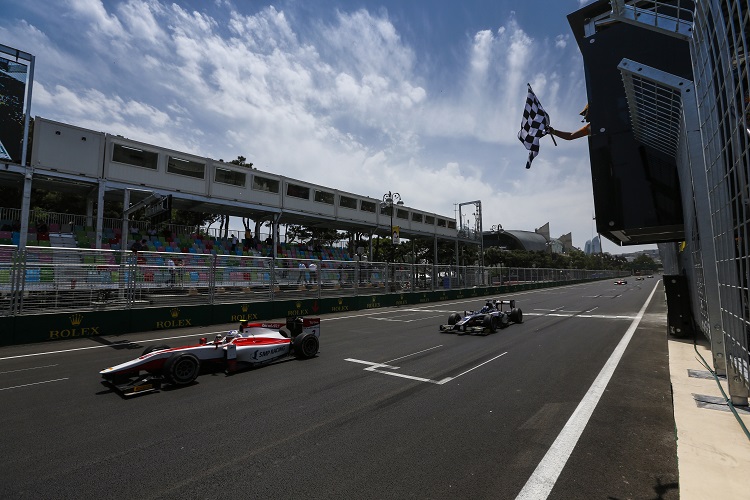