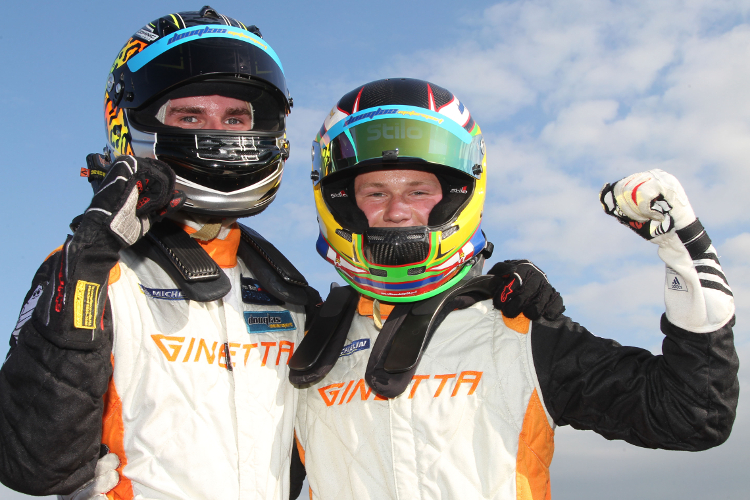 Stuart Middleton continued his domination of the Croft weekend with his second lights-to-flag Ginetta Junior Championship success in two races in North Yorkshire.

Another great launch off the line was key for the pole-sitter as it gave him an advantage he wouldn’t relinquish, though he had team-mate Daniel Harper close in his mirrors throughout the race.

Harper dived past Seb Priaulx at the first corner for second and the Douglas Motorsport duo looked to work together in the early stages to break the tow to the pack behind.

Priaulx’s main competition came from the fast-starting Lewis Brown, who impressively climbed from eighth to fourth by the time the field has squeezed through Clervaux for the first time.

As Harper kept Middleton honest at the front and tried to see if he could force a mistake out of the leader, Priaulx was able to shake off Brown’s attention and close onto the top two.

The nose-to-tail racing wouldn’t produce any major overtakes however, with Middleton leading every lap en-route to his fifth victory of the season so far.

Harper and Priaulx completed the podium behind him for the second race in a row, though on this occasion it was Harper’s turn to take the Rookie Cup success ahead of his class rival.

Brown ran fourth throughout for his best result since Donington Park in April, while behind the main action of the race saw a six car group squabble over fifth place.

Just like he was in race one, the man on the move was former points leader Will Tregurtha, who battled his way through from tenth on the grid to take fifth position.

Tom Gamble made it three HHC Motorsport cars in a row in sixth, though it wasn’t plain-sailing for the team as Charlie Fagg made contact with the rear of his team-mate Gamble on the final lap.

Fagg had been running fifth throughout the race until Tregurtha and Gamble got through at Clervaux, with his efforts to fight back leading to a collision under braking at Tower that eventually dropped him to tenth.

JHR Developments duo Geri Nicosia and Kyle Hornby completed the top eight ahead of him, while an impressive drive for Dave Wooder saw him climb from 21st on the grid to ninth at the flag.

Another driver climbing up the order was Seb Perez from 18th to eleventh ahead of Enzo Fittipaldi, who finished as the fourth best rookie behind Gamble, Tom Wood and Connor Grady.