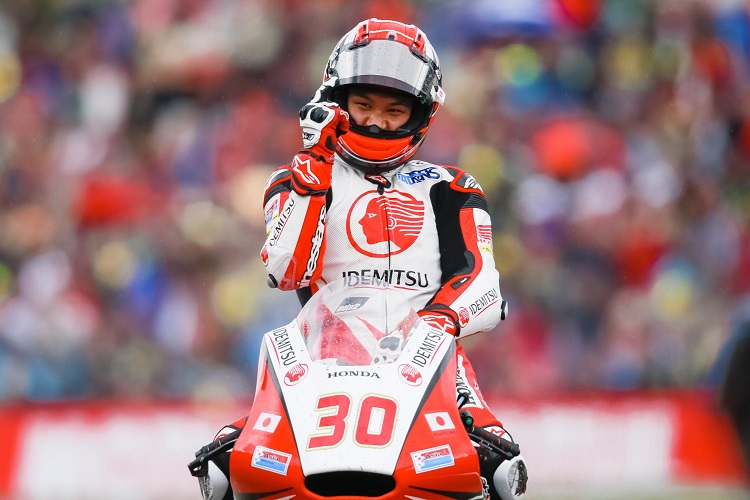 Takaaki Nakagami’s agonising wait for a maiden Grand Prix victory is over after the Japanese rider won a rain-shortened Dutch TT at Assen. The Idemitsu Honda Team Asia rider, who had seven previous podium finishes to his name, pulled out a sizeable lead mid-race and held off a late challenge from Johann Zarco before the red flags ended proceedings two laps early.

In the early stages, the race looked set to see an all-Swiss scrap for victory with Thomas Luthi leading away from pole position, followed by Dominique Aegerter. The pair were soon swallowed up though by the Marc VDS Kalex of Franco Morbidelli who hit the front on lap four while Nakagami followed past a lap later before giving chase.

With both chasing a maiden win, an entertaining battle ensued but Nakagami eventually seized control of the race with a move into turn one on lap ten and with Morbidelli falling into the clutches of Luthi and Zarco, Takaaki had the perfect opportunity to make his escape. The world champion secured second at Stekkenwal but the two laps it had taken to complete the manoeuvre proved crucial as Nakagami opened a three second buffer.

Only the late drizzle could threaten Nakagami now but with conditions steadily worsening, Zarco slashed his lead to 1.5 seconds heading into the penultimate lap but the red flag ultimately came to Nakagami’s rescue, handing him a well-deserved victory. Zarco claimed second, and with it the championship lead, while Morbidelli completed the rostrum spots.

Luthi’s race plummeted downhill after losing the lead with a crash three laps from home ruling him out of fourth. His loss was Sam Lowes’ gain with the Briton inheriting the thirteen points on offer while Lorenzo Baldassarri also benefitted, finishing fifth. Alex Rins ended up a subdued sixth, losing his points lead as a result, while Simone Corsi saw off Alex Marquez and the fading Aegerter for seventh.