New Clio Cup Winner Coates: “It Was An Awesome Moment”

For Max Coates, a breakthrough Renault UK Clio Cup victory was the one milestone left to tick off the list to cap off a superb first half of his maiden Clio campaign, and at Croft last weekend he achieved just that.

It wasn’t just any routine win though. From fifth on the grid, Coates had to work for his success, climbing his way through the order into the lead, before withstanding immense pressure from a former champion to bring the Ciceley Motorsport machine across the line first.

The setting of his maiden victory was poignant too, Croft. Just ten minutes down the road from his Scorton home, the North Yorkshire venue is the only circuit Coates has raced at in each of his seven seasons of racing, in which budget limitations have seriously hampered his race time.

With his home circuit came an incredible amount of support. Donning the branded t-shirts, jackets and caps, a vast gathering of family, friends and fans cheered louder every lap as he got closer to home, before celebrating wildly as Coates climbed onto the top step of the podium.

“When I saw Paul [Rivett] pull off was the first time I started to think I had a chance to win, but it only really started to sink in about halfway round the final lap,” Coates told TCF. “As I left the chicane and pulled a little gap on Mike [Bushell], I felt like I was clear enough ahead that it was mine.

“I looked up to the big screen as I headed towards the Complex and saw that it was showing my team on the pitwall, which is when it started to get emotional inside the car, and when I crossed the line it all got pretty animated in there.

“Mike pulled over and let me go down the pitlane first which is a really nice gesture, and seeing the team in there was when the tears started. It was an awesome moment.” 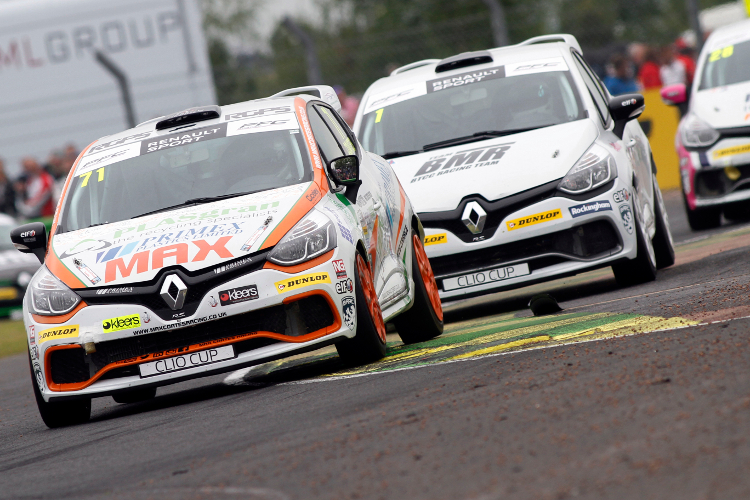 How did Max celebrate his first Clio win? By heading to his local pub to toast Fathers Day: “The rest of the day had all been about me, so we went and had a quiet one, me, my Dad and my brother.”

There’s always been a real family focus in Coates’ racing. From the early days of running his Ginetta Junior as the smallest of privateer outfits, it’s always been a huge family effort to get Coates on track, and the 22 year old is delighted to be rewarding all their efforts.

“The family have put in so much work over the years. There’s been so many good times and hard times, but we’ve always said there is a reason we do this, and that victory was the reason,” he commented.

“For me personally too, it’s been a long time coming. It’s my first outright race win on the TOCA package. I’ve taken class wins and Winter Series wins, but not an overall success, so it feels brilliant. I’ve worked hard at this for a long time and it feels great that it’s starting to pay off.”

The victory was also the first for the Ciceley Motorsport team, who joined the series this year alongside their BTCC operations, and Coates expressed his pride at how their partnership has immediately taken the fight to the established teams and drivers despite hugely limited testing.

“For the team, you can’t say much better than a race win. In half a season in the series, we’ve reached every milestone you can except win a championship, which I think is pretty unheard of,” Coates enthused.

“[Ashley] Sutton achieved similar feats last season, but we’ve not done half as much testing as he got the chance to, and he was racing with the most successful team in the championship.

“We’re completely new to the series, we only did two pre-season tests plus the media day, and the only set of new tyres we’ve run on Friday practice days was on the opening weekend of the season, which is extremely rare. It’s been a challenge, but it’s been hard work and good fun.”

A first race win caps off one chapter of Coates’ career, but the Yorkshireman has now firmly set his sights on using the victory as a springboard for even bigger success over the remainder of the season and beyond.

The win at Croft was coupled with a second place finish in the opening race, results that have put Coates one point shy of the championship top three, whilst two more Graduate Cup wins have built his lead in the class standings to 64 points.

Coates is under no illusion as to the size of the challenge facing him if he is to get himself into the title battle, especially as he hasn’t raced at any of the remaining four circuits, Snetterton, Rockingham, Silverstone and Brands Hatch GP, since at least 2012.

If there’s one driver that’s up for the fight however, it’s Coates: “Hopefully we can carry on this form into the second half of the season. We’ve got a good feeling with the car and we’re right up in the top three or four in outright pace,” he concluded.

“While we’ve had a pole position, we’ve got some work to do with qualifying. We seem to have better race pace at the moment, and while that may be down to us not doing new tyre runs in practice while everyone else is, so we haven’t got a feel of what that’s like.

“We’ll keep working hard at it and aim to keep on the podium regularly. If we can continue like that, then there’s no reason why we can’t still be in the championship fight when we get to Brands Hatch at the end of the season. We’re not going to give it up without a fight.”

*You can read more on Coates’ career so far and his BTCC debut twelve months ago with our feature interview with him from last June, which is available by clicking here.*