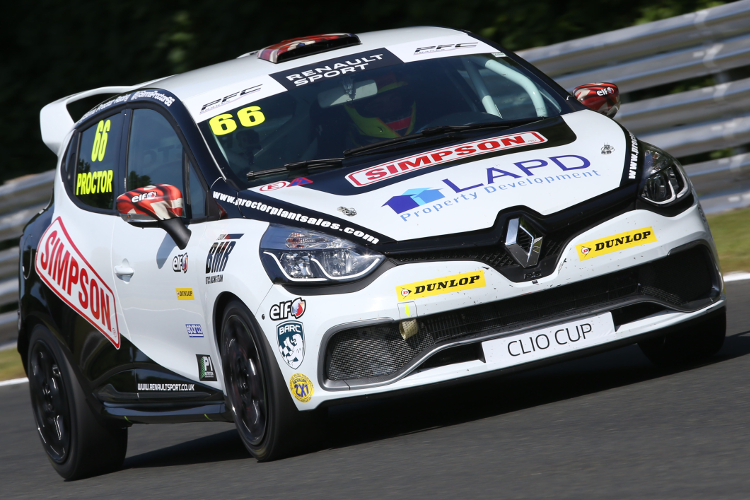 Senna Proctor opened his Renault UK Clio Cup podium account at Oulton Park last weekend, and hopes he can turn the breakthrough into a positive spell of results in the series.

The reigning Ginetta Junior vice-champion had endured a mixed start to his maiden Clio campaign, with a previous best finish of seventh coming on a Donington Park weekend on which he’d dramatically rolled his Clio.

Proctor was able to fully showcase his potential at Oulton however and he kicked off the weekend in near-perfect style – superb teamwork with Mike Bushell on track taking the duo to a Team Pyro one-two in qualifying.

Slipping to third on the opening lap of race one, Proctor found himself in the thick of a four car battle for the lead in the early stages. That came to a head on lap five however, as contact with Paul Rivett at the hairpin dropped him to fourth.

That would be where Proctor stayed for the remainder of the race, but after narrowly missing out on the podium in the opener, Proctor would get the job done in race two as he once again battled with Rivett over the final podium position.

A superb defensive performance saw Proctor keep the three-time champion at bay for the duration of the race to take third, with his two top four finishes help move him into the championship top ten ahead of the visit to Croft next weekend.

“After a really tough start to the season where things had not gone as I would have wanted, I decided to approach Oulton Park with a more relaxed frame of mind instead of putting too much pressure on myself,” said Proctor.

“It seemed to do the trick as we were quick right from free practice and gained second for both races after a really good qualifying. At that point we knew we were in a great position to get my first podium in the Clio Cup and it feels brilliant.

“I would like to thank Team Pyro for giving me a great car this weekend, and I now hope we can continue this momentum into the rest of the season and it’s nice to hit top form coming into Croft, a track I love and is also effectively my home circuit.”