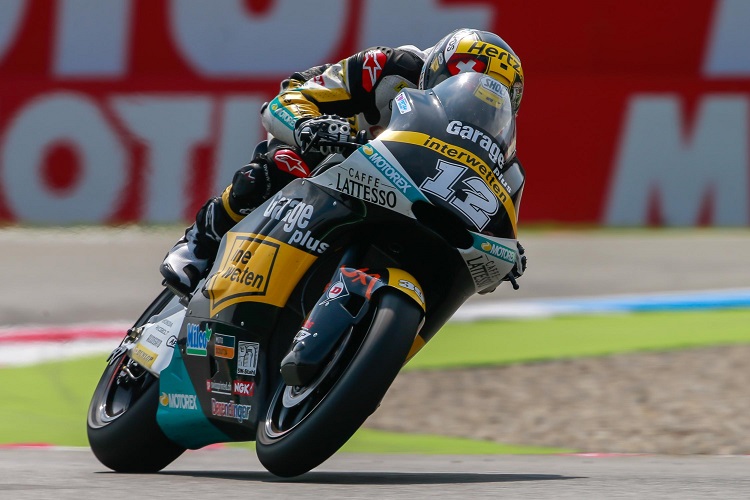 Thomas Luthi will start the Dutch TT from pole position after heavy rain effectively brought an early end to qualifying at Assen. The Swiss rider made the quickest start to the session and with the weather intervening midway through, Luthi was rewarded with pole ahead of reigning champion Johann Zarco.

The preceding MotoGP qualifying session was heavily affected by rain and conditions were far from perfect when the intermediate class began its battle for pole. Alex Marquez was among the bravest riders early on as he took provisional pole on his first run but as the circuit dried, the top of the leaderboard began to take on a more familiar look as Dominique Aegerter and Zarco traded fastest times.

With just over half an hour remaining, Luthi hit the front for the first time with a 1:37.954 although his benchmark time was still half a second shy of the quickest from practice. That wasn’t to matter though as the heavens duly opened, securing Luthi’s first pole of 2016.

Zarco had slipped to seventh at one point but the Frenchman bounced back up to second just as the rain arrived, knocking Aegerter down to third, while Sam Lowes lost his place on the front row as a result and will have to start fourth. Franco Morbidelli lines up fifth ahead of Takaaki Nakagami and Sandro Cortese while championship leader Alex Rins has work to do from eighth on the grid.

Jonas Folger completes the third row in ninth while Lorenzo Baldassarri rounds out the top ten.