Almost halfway through an expanded 25 race Ginetta Junior Championship season and the destination of the 2016 title looks set to go to one of two men, with Stuart Middleton and Will Tregurtha establishing themselves as the drivers to beat over the opening twelve races of the year.

Their duel at the top of the standings has been full of twists and turns so far, with reigning Winter Series champion Middleton being the early pace-setter with Douglas Motorsport, though Tregurtha has hit back as he leads the challenge for reigning champions HHC Motorsport.

After sharing the wins on the opening weekend at Brands Hatch, Middleton edged ahead with wins at Donington Park and Thruxton, but top five finishes in every race so far meant that Tregurtha took the points lead for the first time with a classy double victory at Oulton Park.

The topsy-turvy nature of the title battle was shown perfectly at Croft last time out. Middleton took the first two wins as Tregurtha hit trouble, but then roles reversed as a first DNF of the year for Middleton allowed race-winner Tregurtha to close the gap back to just four points as it stands.

While those two have set the pace, with five race-winners so far and no less than fifteen different top six finishers so far this season, it’s been far from a two horse race at the front of the field, with Lewis Brown and Dave Wooder currently the closest contenders to the top two. 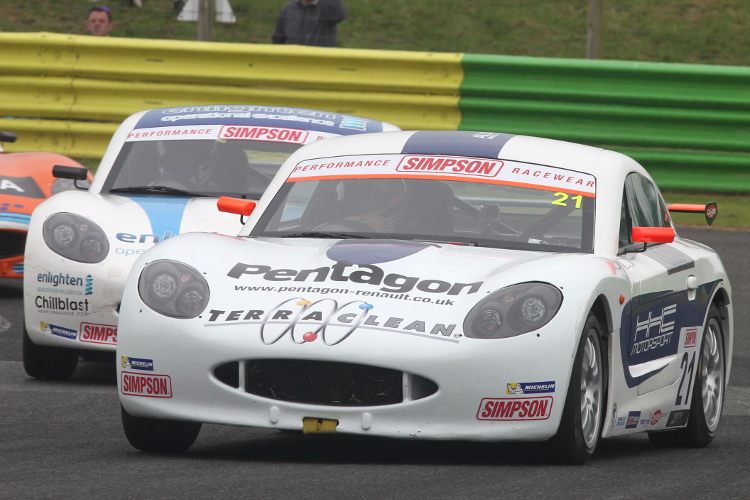 Brown Is The Most Experienced Driver On The Grid With 52 Series Starts – Credit: Jakob Ebrey Photography

Brown’s race pace has been clear for all to see, with four podium finishes and four fastest laps to his name, but for him to turn that into a title challenge he will need to improve his qualifying, with a maiden pole position at Donington being his only top five result in the five sessions so far.

Wooder meanwhile has indicated he has the pace to match the top two, having finished on the podium at least once in each race weekend so far. A maiden victory came his way at Thruxton, but some tough races since, including a retirement at Croft, has lost him crucial ground in the standings.

As usual in the Juniors, one of the most exciting aspects of the racing comes as we watch the latest batch of racing newcomers in action, and this year they’ve been as fast and competitive as ever, with reigning Scholarship top two Daniel Harper and Seb Priaulx leading the charge.

Harper had made history this year as the first Scholarship winner to take an outright race win in his maiden campaign, with a breakthrough success at Donington Park and four further outright podiums giving him a healthy lead atop the rookie standings.

Aiming to chase him down is Priaulx, who has established himself as Harper’s main competition with seven Rookie podiums so far, whilst also joining his adversary in the thick of the action at the front of the field with outright top three finishes at Thruxton and Croft.

Four other drivers have posted Rookie Cup victories, though one driver who hasn’t is currently the third best Rookie in the standings, Tom Gamble. The HHC man has consistently to thank for that, with six class podiums and seven outright top ten finishes to his name so far.

Gamble, Harper And Priaulx Have Been The Standout Rookies So Far – Credit: Jakob Ebrey Photography

Max Bird was the first Rookie class winner of the season meanwhile, though he has seen the going get tougher following an impressive start to the season, while the latest driver to score a class win was Enzo Fittipaldi, the culmination of steady progress for the Brazilian.

The other two class victors have come from the Elite Motorsport camp, with Harry King and Tom Wood sharing the Oulton spoils. For Wood that was his strongest weekend so far, while King had previously excelled at Thruxton with a fantastic drive to fourth overall.

Elite’s former driver Geri Nicosia meanwhile has been knocking on the door of a maiden podium finish since his switch to JHR Developments, with a handful of top six finishes to his name including a best finish of fourth at Croft.

A driver who has enjoyed that podium breakthrough is Charlie Fagg. The HHC man has put a relatively slow start to the season behind him with three top four finishes in the last five races, including a superb second place finish in the Oulton opener.

Like Nicosia, Cameron Roberts has got a close as possible to a podium finish with a best of fourth, having shown his overtaking prowess so far with an average of five positions gained per race. That’s come at a cost however, with an accumulation of penalty points leading to his license being revoked.

One of the most remarkable statistics in the series at the moment is the fact there has been thirteen different drivers top the last fifteen qualifying sessions, with Brown, Tregurtha and Seb Perez being the three men to take their maiden pole positions this season.

While a tough weekend at Thruxton meant he couldn’t convert that pole into a standout front-running result, Perez was able to exactly that next time out at Oulton with a fourth place finish, a result he’s keen to build on and challenge for the top three.

Perez Has Regularly Been In The Thick Of The Thrilling Junior Midfield Action – Credit: Jakob Ebrey Photography

Fellow JHR man Kyle Hornby also has clear podium credentials, having made two visits to the overall rostrum last season, but a tough first half of the year means he’s been unable to live up to his pre-season billing as a potential title contender, with just a best finish of seventh so far.

Connor Grady meanwhile has shown strong progress in recent meetings with three top ten finishes including a career best sixth last time out, while his rookie TCR team-mate Jordan Collard has made steady progress with one outright top ten and one rookie class podium so far.

The competitiveness of the series has been shown with nineteen drivers out of 23 having finished in the top ten over the opening five meetings, with the four drivers aiming to reach that milestone being the ever-improving Anthony Ayres, Dhyllan Skiba, Greg Johnson and Zak Fulk.

One to watch in the second half of the season meanwhile is Olli Caldwell, who after racking up the testing miles in pre-season would make a stunning debut at Croft, bursting onto the scene just a week after his 14th birthday with fifth overall and a Rookie podium in his maiden race.

With a championship battle that is set for many more twists and turns, at least ten drivers capable of challenging for race wins and many more aiming to work their way up the grid, the Juniors are set to be at their unpredictable, action-packed best throughout the final five meetings of the season.

Returning to action at the end of the month at Snetterton, the series heads north to Knockhill for the first of three consecutive triple-header meetings. Rockingham and Silverstone follow, before the season comes to a close at Brands Hatch GP in early October.

Full championship standings at the halfway point can be found here.