House Makes Himself at Home after Dominant Race 2 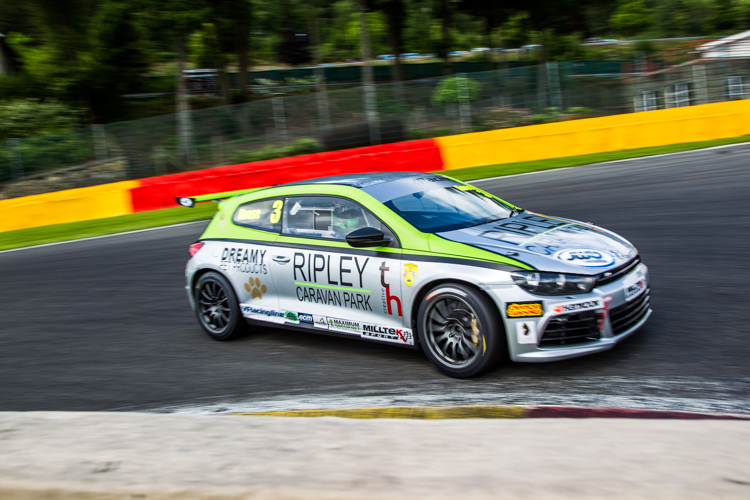 Phil House claimed the final win of the weekend around the legendary Spa-Francorchamps, with his victory putting him clear at the top of the VW Racing Cup.

The reverse grid affair left Tom Witts on pole, a position he kept into the first corner. Behind him, double champion House, jumped up to second as he battled with Kenan Dole.

A strong start from Dennis Strandberg saw him move into fourth place. The Swede had been the star of the show on Friday and was determined to remain at the front of the action going into the final race.

Witts set about extending his lead, though it would only last a lap as House harried the Maximum Motorsport driver along the Kemmel straight. With better drive, Witts lost the lead to House who didn’t look back.

Further behind, Strandberg had made his way past Dole as the top four broke away from the rest of the pack. The #4 was not content with just one place, as he calmly snatched second, chasing House for the lead.

As the race settled down, drivers started to look for any advantage. The battle for fifth intensified, with Bobby Thompson being pushed down to seventh. This promoted Jack Walker-Tully who eventually took fourth ahead of Witts.

His progress was halted though. Walker-Tully went side by side with Strandberg, but came off the worse. Both collided spinning them and bringing out the safety car.

Strandberg, who had made good progress in the opening half of the race soon struggled for grip and appeared to lose control at the far end of the circuit, the impact saw the VW cars spin out, with Walker-Tully ending up backwards in the tyres.

The safety car ended House’s endeavours and destroyed the gap he’d built up. While many expected a chequered flag to be flown, another lap was given after the safety car pulled in.

House continued to lead and maintained the gap to move ahead in the championship. Witts was now promoted to second in front of Thompson, as the field organised themselves behind. Kieran Gordon took fourth with Dole falling to fifth, Benjamin Wallace rounded out the top six.

Series returnee, Alex Dziurzynski had been running sixth, but was caught up in an incident on the final lap. He joined Amy Dziurzynski on the sidelines, in what was a terrible weekend for the pair.

Strandberg lost control at Les Combes, tried to correct and hit Walker-Tully, almost knocking him over. Walker-Tully, now a passenger, then spun, hitting the wall backwards and retiring from the race. (Credit: Marvin Hall/MH Pics)

On the podium, winner House spoke to TCF.

“I wasn’t expecting to have the pace to be honest, I was carrying full ballast.” House started. “But when the opportunity arose on top of Kenan [Dole] and Toby [Davis]. I got past cleanly, I was just dreading the safety car when it came out luckily held on for that last lap.”

As he was leading, House was unable to see the incident behind him, but commented on his racing colleague.

“I feel sorry for Jack [Walker-Tully], he’s one of the drivers in the championship hunt. To see him at the sidelines after his damage at Silverstone is a bit disappointing, but I hope everyone’s alright.”

“I think I’m still winning on the drop scores, but it’s about keeping Bobby [Thompson] in sight. I’d be quite happy to play the waiting game if I had to, but I’ll happily jump at the opportunity to take it.”

Considering his position in the championship, House will know that the ball is now in his court. Drop scores should help some of his more unlucky rivals, though consistency may help Thompson maintain his position over the field. Looking ahead to the second half of the season, House knows it will not be easy.

“I like Snetterton, I got a win at the circuit last year, but Donington‘s never been overly kind to me. I’ve got two races there, but hopefully my luck will change this time. We’ve also got the big one at Brands Hatch, so hopefully we can do it there.”

“I might have to look at the points again, because I think Tom [Witts] might be back up there, so I might have to reassess it after this weekend. Bobby’s been really consistent, but it’s nice racing these two as they’re really clean, an absolute pleasure.”

House may have avoided the majority of the incidents, but seemed concerned over driving standards elsewhere in the series.

“There’s a couple of wild young one’s down there that need a talking to after this race. You just need to look at the front of their cars to see who they are. “