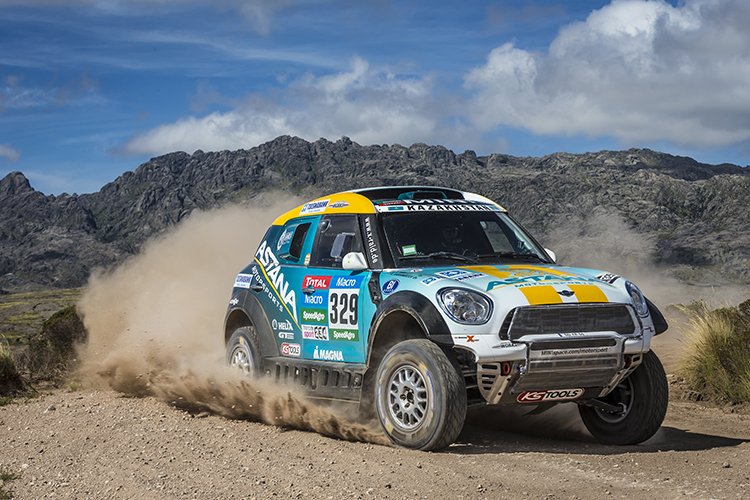 Only fifteen seconds covered the top twelve finishers as all four MINI All4 Racing drivers were firmly in the top ten after the opening stage at the Silk Way Rally.

The leading Mini All4Racing finisher after Leg 1 of the Silk Way Rally was the Russian duo of Vladimir Vasilyev and Konstantin Zhiltsov, finishing the early-evening race in second place, four seconds behind the leader Stéphane Peterhansel for Team Peugeot-Total.

Yazeed Al Rajhi and Timo Gottschalk were the next best-placed of the four Mini’s in fourth place. Harry Hunt was seventh, while Aidyn Rakhimbayev and Anton Nikolaev were in eighth place, meaning all four MINI All4 Racing crews made the top eight after Leg 1 of the Silk Way Rally.

Al Rajhi said “The ground was very soft. I think everyone was surprised at how soft it was. We tried to stay in top five for the start tomorrow and succeeded. My plan is to push for tomorrow and learn at the same time. This is the first time for me in this race but I know we have a very good car in the MINI ALL4 Racing and a very good team and we can fight hard to win this race.”

Hunt added “It was a small amount of driving compared to what we have in store for the next two weeks. There were plenty of jumps for the spectators and they seemed to like it. This is only the start and it is such a long rally. To finish would be a result but obviously we are looking to do well… top ten, hopefully more. We’ll see.”

By Pontus Lindroos
1 Mins read
Loeb could be set to return to Dakar Rally early next year with Toyota after his contract with Hyundai ends this season.
Dakar