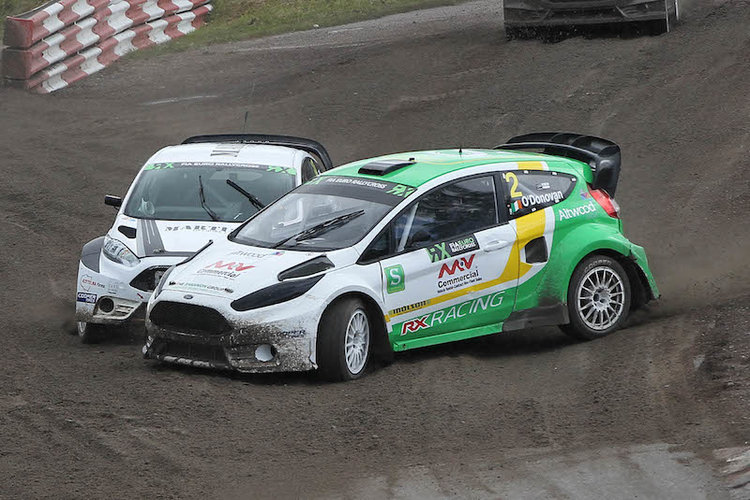 Ollie O’Donovan enjoyed a positive debut at the Holjes Circuit which played host to round three of the 2016 FIA European Rallycross Championship, but was left wanting more.

The former British Rallycross Champion showed that the Tony Bardy Motorsport prepared Team RX Racing Ford Fiesta was on the pace despite finishing Q1 in 17th place overall, before going on to win his Q2 race to finish in 12th place overall after day one. On Day two, despite taking two joker laps for a jump start in his Q3 race, the London based Irishman finished in second place behind Albatec Racing’s Tommy Rustad.  However in his Q4 race, as O’Donovan was looking set for a place in the Semi-Finals, contact with another driver who exited the joker lap pushed his Fiesta into a spin and this led to retirement.

Despite the setback of not making the Semi-Finals in his second Euro RX event of the season, O’Donovan was satisfied with the pace of the car, “I was really pleased with our performance this weekend in Holjes, the Fiesta was working well and we worked hard on our setup in the wet conditions, which we don’t have that much experience of with this car,” explained O’Donovan.

Whilst the next Euro RX event in Spain doesn’t take place until September, O’Donovan will still be keeping busy in both World RX and British RX events, “It’s a shame because given that is only the second time we’ve used the Fiesta since last October, she’s going really well. I think our car is one of the best handling Fiestas in the championship, certainly out of those with longitudinally mounted engines.

“We’ll stick at it and aim for a strong result in the last two rounds of the Euro RX championship in Spain and Latvia, but we’ve got some British RX and World RX events to concentrate on ahead of that.”

By Pontus Lindroos
2 Mins read
The entry lists for Spa World RX of Benelux and the season finale of Euro RX have been revealed.
European Rallycross

Euro RX: Evjen is Top Qualifier After Riga Day One