The team have the least experience out of the top three runners with the car, having taken delivery less than a year ago. FF Corse have been running Ferrari 458 GT3s for years, but were hobbled by electrical problems. ING Sport have completed a full season in their BMW Z4 GT3, but were still 4 seconds a lap slower in first practice. Even the crew with the least experience in their chosen machine, the #7 Neil Garner Motorsport run Renault RS01, managed to out perform the more established teams.

In the free practice session, which was made more difficult by an oily track surface all around the Grand Prix layout at Donington Park, Nigel Moore and teenager Phil Hanson set the pace, well on the way to five seconds a lap faster than the BMW of ING Sport. Behind the Endurance Racing Series refugees came another new car, the #44 Ferrari 458 Challenge of FF Corse’s Clarke and Atkinson. Fabio Randaccio‘s Lotus Europa, shared with Nick Randle came in fourth in practice ahead of the Mike Moss and Tom Howard driven Moss Motorsport machine.

The defending champions, Calum Lockie and David Mason could only manage a somewhat lackluster 12th place in practice.

The qualifying session looked a little more like it with the Hanson and Moore Audi still on form but with Lockie and Mason only half a second behind. This still shows the pace of the Audi crew though as their car is an ‘old’ GT3 machine, one of the pre-Ultra R8s while the FF Corse run machine is a full 2015 spec GT3 car. Nearly three seconds further back was the Renault RS01 with the fourth class 1 entry, the ING Sport BMW, in a shocking eighth place overall.

Class 2 was topped by the newcomers in the dark blue #44 machine ahead of the identical in all but colour machine of Mike and Anthony Wilds. The Class 3 pole sitter lined up sixth, Jakob Matthiassen and Steve Fresle sharing the drivng in the 43 Century Motorsport Ginetta GT4.

The class three battle for pole was the tightest in the field with second in class going to Jody Fannin and Chris Murphy. The Whitebridge Motorsport Aston Martin, newly free of the novice cross for Chris Murphy, set the time on lap six of seven. The Ginetta on pole turned in seventeen laps during the session and could only go 0.133 seconds faster.

Class 4 was topped by the Moss Motorsport BMW, while class five was topped by Synchro Motorsport. The Synchro team went to Donington Park the spiritual if not actual championship leaders. Only the fact that class 5 has been under-subscribed all year denied them the honor as the only car to be unbeaten so far.

The entry was slightly diminished by the lack of the Newbridge Motorsport Porsche Boxter of Fareed Ali and Britcar Media Deligate Chris Valentine. A crash in testing on Friday put an end to hopes of running a new Porsche Cayman race car but ever prepared, the team had the Porsche Boxter which had carried first Valentine then Ali through two seasons of Britcar Production Championship competition. The team’s travails weren’t done however and during first practice Valentine was at the wheel when the oil breather cracked, adding to the greasy nature of the track and forcing the withdrawal of the car.

The cars lined up for the three hour race to end the Saturday, a day of action which also included several heats for the SuperKart Grand Prix, with the pro drivers at the wheel. New regulations for 2016 mean the driver who set the fastest time in qualifying have to take the start and so the front row of the grid saw Nigel Moore pitted against Calum Lockie. The plan for the Ferrari was simple, a clean get away followed by clear air in front at the exit of Redgate Corner.

It didn’t go according to plan.

The #1 machine did make a great getaway from the lights but the Audi wasn’t phased by facing down the two times series champion. Moore hung on to the inside line at Redgate, forcing Lockie to decide between gravel or a lift, the car slotted in behind the Tockwith machine and so began a battle for supremacy.

The Audi initially pulled away to a gap of around six seconds but Lockie countered, halving the margin. Moore responded and the pair traded fastest laps until finally Moore broke away leaving the Ferrari to contend with traffic from behind. 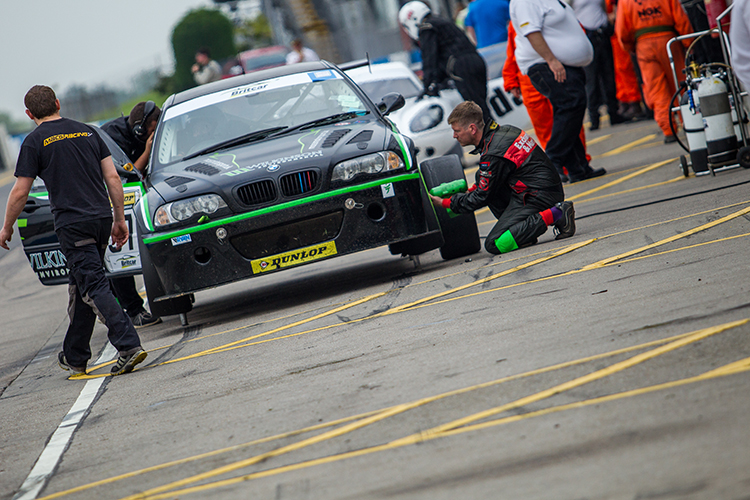 Class 1 was a mechanical disaster area and the problems started on lap 4. Ian Lawson began an on-off relationship with the pit lane, bringing the BMW Z4 GT3 in with a gearbox problem. The Ferrari of Calum Lockie developed an electrical gremlin after around 40 minutes which plagued both drivers for the rest of the race. The car kept dropping into limp home mode, the team worked on the car but with little success.

The other class 1 entry, that of Neil Garner Motorsport, performed very well for much of the race until a gearbox problem in the final hour stuck them in the bottom half of the box. The car continued on though, holding down second place in class and bouncing off the rev limiter down the main straight. It was touch and go if the car would make the finish but Nick Holden and Andrew McKenna brought it home in fourth overall.

This dropping away of the competition gave Hanson and Moore an easy day but neither were prepared to just waltz home. The teenager Phil Hanson earned the Sunoco Driver of the Day award for an uneventful but impressive middle stint in the Audi, gaining experience in the car which will stand him in good stead for the team’s efforts in the Michelin GT3 Le Mans Cup.

The big battle was for class 3 with the Ginetta of Fresle and Matthiassen dueling with the Whitebridge Motorsport Aston Martin GT4 at the hands of Fannin and Murphy.

The first scheduled stops came around fifty minutes into the race and a chink in the armour of the Audi was reveled. The big German GT3 would need a splash and dash to get to the end, draining the tank in less than an hour, the first 75l of Sunoco fuel went in and Moore handed over to Hanson. Next in was the class 2 leading 458 of Layton Clarke who handed his steed to Simon Atkinson and gifted the lead of the race briefly to the #9 machine of the Wilds.

The RS01 took over the lead as the second FF Corse machine came to the pits, running much longer due to a lower than expected fuel burn rate. The gearbox problem which would later cause such worry was already making itself known and the pace was down. Another cruel trick was played on the NGM team as Nick Holden pitted at 75 minutes. The safety car was deployed just as Holden was heading to the pit lane but the Renault didn’t get to the pit lane before the course car exited. That meant that the Neil Garner team could only fill 25l of fuel.

Two of the biggest stories in the race were the victory for the new #44 Ferrari 458 and significant progress for the Woodard Racing Organisation MINI JCW. (Credit: Nick Smith/TheImageTeam.com)

The Britcar special tactic of pitting on sequential laps helped the Renault, Andrew McKenna returning to the pit lane for another 25l to help it on its way. The Tockwith Audi and both 458 Challenge machines took to the pit lane for an extra dump churn too. The other safety car pit visitor was the Dan Wheeler driven Synchro Motorsport Honda Civic, which stopped, took on a fresh drinks bottle and had Alyn James working on data briefly before going back out. Shortly after the car came in for its driver change.

The safety car had been deployed because of the #1 Ferrari which had just rejoined at the hands of David Mason before grinding to a halt out on track. Race control was a little indecisive in putting the safety car out though which is why the Renault got caught out on the way into the pits. When the safety car returned to the pits Phil Hanson put the pedal to the metal and built his one minute advantage over class rivals McKenna and Holden into a two lap margin by the end of the race. ING Sport overcame its early race issues to claim the final step of the class podium.

Elsewhere in the field it was a case of long range battling between the two FF Corse Ferraris, the newcomers finally building a 42 second lead over the Snetterton victors to claim second on the podium and victory in class 2. Regular pit visits for a number of little niggles droped the Porscheshop 911 to 10th overall but the RSR spec 997 machine did manage to classify and take the bottom step of the class 2 podium.

Class 3 resolved itself early too, the Century Motorsport Ginetta gaining the upper hand and earning a two lap lead over the Aston Martin which had been its early race compeition. Murphy jokingly blamed his pace deficit to the Ginetta on tyres worn out by the close fighting between Jody Fannin and Jakob Matthiassen. Third in class went to TrackTorque whose Chevron struggled the entire race with a slipping clutch.

In Class 4 there was no-one who could answer the pace of the Moss Motorsport BMW despite two unplanned pit stops for tyre issues. Tom Howard brought the car in early for a rear tyre problem while Darren Nelson, who guested in the car for the longer race, suffered a front puncture in the final fifteen minutes of the race.

The nearest class 4 rival was the Ginetta G50 of Glenn Finn and Richard Burrows who struggled with differential problems throughout the race but still managed to limp the car to the finish. The team have only recently aquired the Ginetta and struggled with a lack of parts, something Glenn Finn is determined will not happen again.

In class 5 the little hiccup for the Synchro Motorsport Civic did little to hobble the car and Alyn James, racing with his second new co-driver in three races, from continuing his unbroken streak of class wins. The big story in the littlest class though was the impressive progress made by Woodard Racing. The little Mini Cooper JCW has looked out of its depth, even in the lowest class in previous events but Donington Park showed improving pace and much improved race strategy.

The car still finished in 12th place and 18  laps down on their only class rival but signs are there that progress is being made. Eventually the under-subscribed class could see a battle, with two cars in the running for victory.

The Dunlop Endurance Championship now heads to Thruxton in Hampshire for a two hour race on one of the fastest circuits in British Motorsport. Action gets underway from 0930 tomorrow morning.