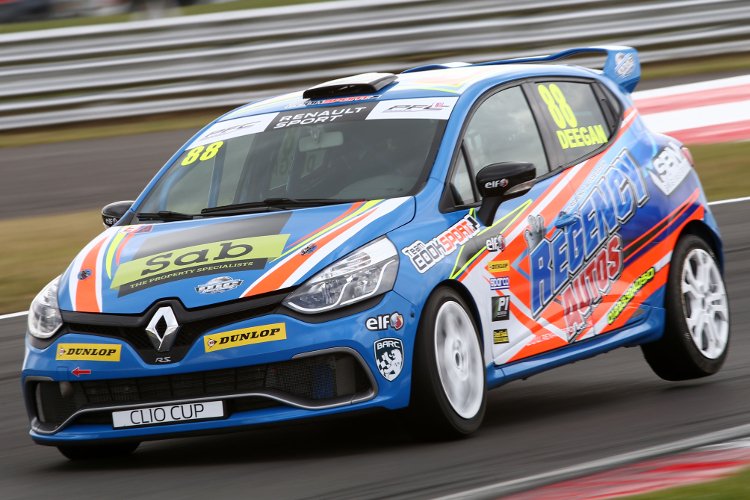 Following a positive debut at Snetterton earlier this month, Shayne Deegan is targeting a top ten breakthrough in the Renault UK Clio Cup this weekend at Rockingham.

The current Mini Miglia series leader made his championship bow with Team Cooksport in Norfolk, finishing up fifteenth and seventeenth in the two races after qualifying a position lower for both.

After gelling well with his fourth-gen Clio racer across his debut weekend, Deegan has now purchased the car from the team and is expected to complete the rest of the season with a full campaign in mind for 2017.

“I want at least one top ten at Rockingham. I ran inside the top ten briefly at Snetterton, but came off second best in a clash with someone else that put me back,” Deegan told Renaultsport.

“There was a lot to learn there, particularly with the technicalities of the car. I had to adapt my driving style quite a bit. For Rockingham I’d like to get the car to oversteer a bit more – that’s my style.

“I’ve got a bit of experience of the track too in Stock Hatches when I got a win and a second place after being punted down to 26th! So I know it’s possible to pass around there …”

With George Jackson’s departure to JamSport Racing ahead of the Rockingham weekend, Deegan is part of a three car entry from the Cooksport squad with Masters Cup leader Lee Pattison and Rory Collingbourne.