Opinion: Credit Where It Is Due in Carrera Cup GB

The opening encounter in Northamptonshire had seen a significant three titles claimed; the Rookie championship, the Pro-Am1 honours and the teams award.

Let’s start with the Rookie award. As the Porsche Scholar for 2016/2017 expectation was on Charlie Eastwood from the first round of the season at Brands Hatch in April. With 2015 champion Cammish as a teammate and having been selected after a rigorous assessment day, Eastwood was never just going to fade into the mid-field.

After a steady but impressive start to his season with a fourth and sixth at Brands Hatch, Eastwood took up the early season mantle as best of the rest behind the duelling Cammish and GT Marques driver Dino Zamparelli.

Three podiums across the Silverstone World Endurance Championship support round and the Oulton Park opener were then followed by a slight dip. An off road excursion led to a fifth in Oulton Park race two, before a fourth in race one at Croft. The second encounter in Yorkshire was blighted by tricky conditions and Eastwood’s worst result of the season so far – an eight position.

However, it was his run after the summer break that cemented his place as the stand-out Rookie of the season. Four consecutive second places across the Snetterton and Knockhill meetings suddenly thrust Eastwood into contention for second position overall in the title race.

Poor qualifying at Silverstone threatened to derail the Irish driver’s hopes of claiming his prize early, however a stunning drive from eleventh to third was enough to secure the Rookie championship for 2016 and the £50, 000 prize pot that came with it. A win at Brands Hatch GP would be a fitting way for him to end the season. The tag of favourite for the 2017 title, dependent on entry list, isn’t too harder stretch for one’s imagination.

Eastwood has been a stand-out in 2016 and deserved Rookie award. (Credit: James Lipman)

Euan McKay will be a man sure to be fighting with Eastwood in the Pro classification in 2017, if he returns to Carrera Cup GB. The combination of the Scottish charger and the In2Racing team has been a formidable one in Pro-Am1 this season.

Whereas in 2015 the fight for class honours came down to a drag race in the final round of the season, Euan was able to wrap up the class title three races early in 2016. At Brands Hatch in April he set out his intentions with a second and a fourth in class.

The following meeting at Silverstone was the venue for his first class success, but race two featured an unfortunate tangle with brother Dan that took them both out of the race.

Euan’s season then settled into a repetitive but pleasing narrative. First, first, first, first, first, second (usurped by Dan McKay in the dying moments of the race), first and first. That was his score-card across the Oulton Park, Croft, Snetterton and Knockhill meetings.

A slightly more conservative approach meant no gold medal on the championship’s return to Silverstone last weekend, but a second in class in the opening encounter was enough for him to seal the title. Another second in the day’s closing race meant that for the first time since April and Brands Hatch’s opening meeting Euan hadn’t claimed a class success.

Heading to the Brands Hatch GP finale he will undoubtedly wish to re-assert himself with the championship now laid to rest, but a resurgent Dan has been gaining pace race by race. A duel between the pair on equal terms will be something to savour. 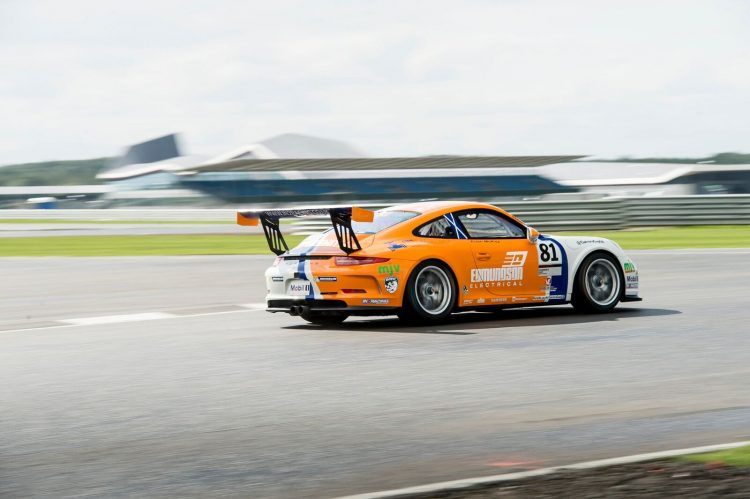 E. McKay has been dominant in Pro-Am1. (Credit: James Lipman)

Dan Cammish has provided fans of driving skill something to savour in 2016. When it was confirmed he would return to defend his title, this writer’s initial response was a tad hysterical and bemoaned the fact the driver who had dominated the field in 2015 had been unable to move forwards with his career.

In hindsight whilst Cammish may have wished to move forward, defending his crown against new opposition gave him the chance to fully validate his performance of a year previously. To prove it wasn’t just a flash in the pan.

It wasn’t. Eleven race wins and a second title later, Cammish has once again been the form man of Carrera Cup GB. Controversial track-limits penalty in the season opener aside, Cammish stormed the first half of the season… Until we reached Croft.

Technical issues blighted the Yorkshireman’s home weekend and an amazing run of TOCA podiums stretching back to his Formula Ford days was drawn to an ignominious close. He retaliated with a second position in round eight and hasn’t looked back since.

Thoughts that Zamparelli may have used the Croft weekend as a spring-board for a title challenge came to nought as the former GP3 racer struggled in the early part of phase two of the season. In truth the Porsche Mobil1 Supercup support race to the British Grand Prix was the turning point.

Although Cammish wasn’t the star of the weekend, or top Carrera Cup GB driver in the race, a ninth position finish was better than Zamparelli’s hard-fought fifteenth. As Cammish hit his summer-stride Zamparelli faded and ultimately these two factors combined allowed Dan to claim the title two races, and indeed two weeks, early.

Full-steam ahead… Cammish has been on-top again in 2016. (Credit: James Lipman)

The achievements of Cammish and Eastwood, would not have been made possible without the efforts of the Redline Racing operation behind both men.

Redline marked a significant land-mark with their one-hundredth race victory at Snetterton and it was fitting that they should secure the teams award with a 1, 2, 3 finish in the first race at Silverstone.

Said race marked Tom Oliphant’s first category podium and meant that three of Redline’s four Pros have finished on the rostrum at least once, with Lewis Plato coming close with a fourth position at Oulton Park earlier in the season.

Pro-Am1 and Pro-Am2 entries for John McCullagh and Barrie Baxter have also reaped rewards and proved that the team is equally as capable of setting up a car for a seasoned Pro to take to the limit, as they are of setting up a slightly more compliant vehicle for the less experienced driver.

Teams can often be overlooked, however the achievements of Redline simply cannot be ignored in 2016.

With only the Pro-Am2 faction yet to see a champion crowned, there will be an emphasised end-of-term feeling to the Brands finale in 2016. Throughout the order, there will be drivers with points to prove and those looking to simply enjoy the season’s end. The stage is set for some more fantastic racing and tantalising battles at the culmination of Carrera Cup GB 2016.