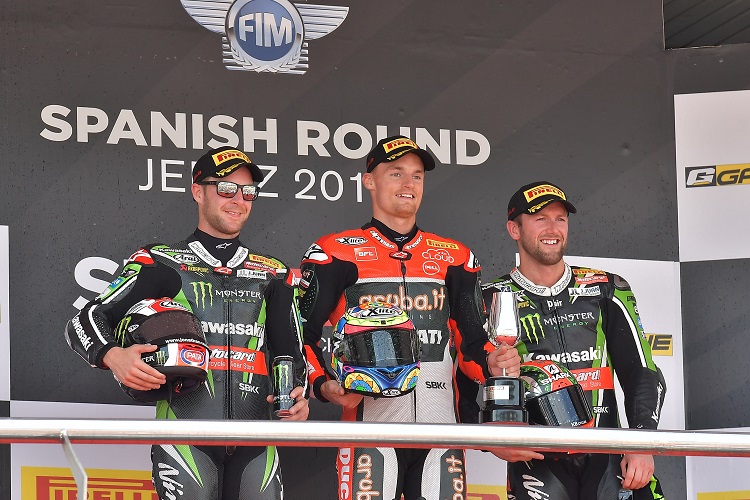 Chaz Davies moved level with Jonathan Rea on nine victories for the 2016 season with another crushing display in race two at Jerez. The Ducati rider led from start to finish on his way to yet another double while Jonathan Rea and Tom Sykes finished line astern in second and third, ensuring the championship battle will go down to the final weekend in Qatar.

Sykes started from pole position but his time out in front was even shorter than Saturday’s race with Davies diving straight up the inside of the Kawasaki into the Dry Sack hairpin on lap one. From that point onwards, the lead continued to grow as Davies eased to a fifth victory in six races and the championship fight took centre stage.

As half distance approached, Rea increased the pressure on his teammate before sitting Sykes up around turn five, moving up to second. The Yorkshireman wouldn’t give up and shadowed the no.1 machine throughout the last ten laps but Rea rode inch-perfect to keep his title rival at bay, ensuring he will take a 48 point lead to the season finale at Losail with just 50 left to race for.

Nicky Hayden closed in on the Kawasakis in the latter stages before following them home in fourth while Sylvain Guintoli rounded off Yamaha’s best weekend of the season with fifth, just ahead of Michael van der Mark and Alex Lowes, the PATA squad’s 2017 rider pairing.