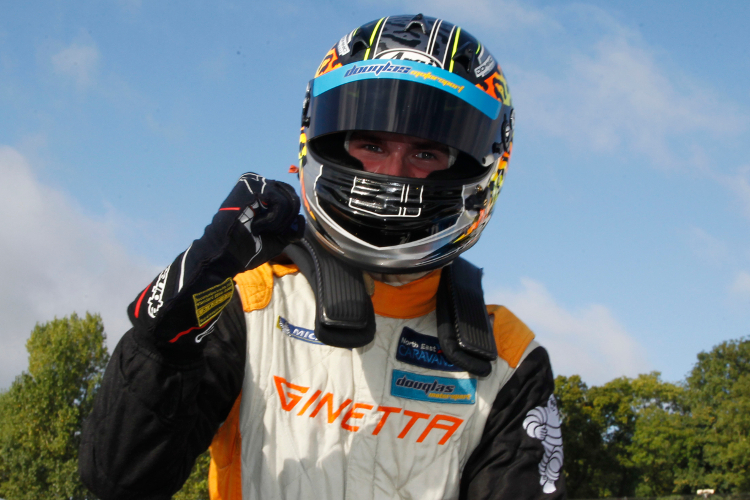 Stuart Middleton edged out Lewis Brown in a photo-finish to take the penultimate race win of the 2016 Ginetta Junior Championship season.

The opening race of the weekend around Brands Hatch GP was rescheduled following a postponement on Saturday evening.

That came following an incident involving Dave Wooder, Jenson Dineen and Charlie Digby, with all three drivers not being cleared to race today.

With Wooder having taken pole position in qualifying, his absence meant Brown started from the front, however a fast-starting Seb Perez stormed past heading through Paddock Hill Bend.

Behind, a gaggle of cars headed through the corner with a big hit on the inside kerb catching Seb Priaulx, who was sent spinning down the hill.

All the cars fortunately managed to avoid him, but in the process Greg Johnson was left stuck in the gravel trap, leading to the introduction of the safety car.

The lead changed pretty swiftly at the restart, with Brown diving down the inside of Perez at Surtees, while behind Harry King then survived a wide slide at Hawthorns to hold fourth.

Ahead, Middleton nipped ahead of Perez and went on to break clear with Brown, as behind Perez soaked up a lot of pressure from King for a number of laps over third before the latter fell back.

That put King in the clutches of Charlie Fagg and Olli Caldwell, with both working their way past on the Grand Prix loop on lap six to demote the leading Rookie to sixth.

On the final lap that was all change again though with Caldwell losing out to three drivers at Paddock Hill, before King then dispatched Fagg later in the lap to get back to fourth at the flag.

Ahead of him there was a dramatic conclusion playing out meanwhile, with Middleton having run right on the tail of Brown for a number of laps, their duel going right down to the wire.

A great run out of Stirlings on the final lap allowed Middleton to draw alongside through Clearways, with a drag race to the flag going in Middleton’s favour by only 0.062s.

The closest winning margin of the season so far secured the Douglas Motorsport ace his sixth win of the season, with Brown reaching his personal half dozen of podium finishes with second.

Perez completed the podium ahead of King, with Fagg and Daniel Harper rounding out the top six – that result meaning the latter has a 20 point advantage in the Rookie Cup heading into the finale.

That lead is over Priaulx, who fought back admirably from his early spin to take ninth at the flag behind Geri Nicosia and Caldwell, the latter completing the Rookie rostrum.