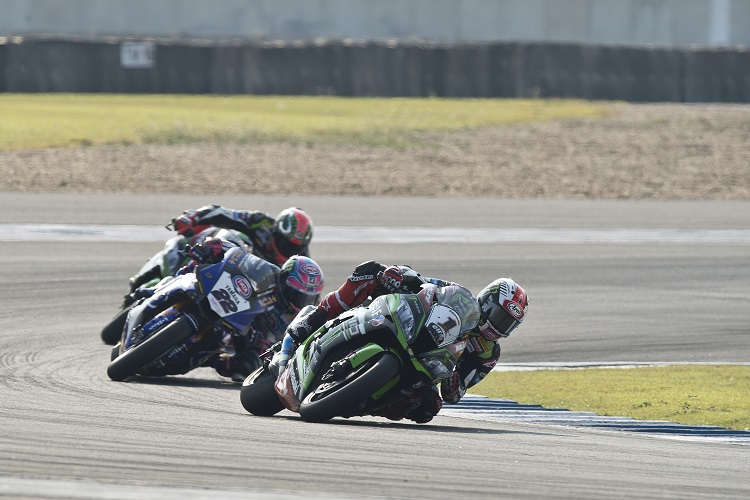 Jonathan Rea became the first rider for fourteen years to win the opening four races of a World Superbike season after dominating again in race two at Buriram. The reigning champion was in a class of his own with Kawasaki team-mate Tom Sykes snatching second after passing Marco Melandri at the last corner for the second day running.

The revised grid rules had put Melandri on pole for race two but the Italian soon had Chaz Davies and Rea breathing down his neck after blistering starts from the third row. Davies threw away any hopes he had of victory though on the second lap with a crash at turn three, the Welshman outbraking himself at the end of the back straight and falling to the back of the field.

Davies was handed an unexpected reprieve soon afterwards though as Lorenzo Savadori highsided at the final corner on lap four. The Italian was caught out by an engine problem which spilled fluids onto his rear tyre, and the circuit. With debris everywhere and the track surface in need of cleaning, the red flags were thrown, giving Davies a chance to take the standing restart from the seventh row.

Despite a shortened race distance, Rea wasn’t threatened on his way to a first ever Thailand double while Sykes produced a repeat of his race one manoeuvre to grab second, outbraking Melandri into the final corner. Alex Lowes shone again on the improving Yamaha to take fifth ahead of Jordi Torres although an oil leak prevented team-mate Michael van der Mark from taking the restart.

A crash for Eugene Laverty and a mechanical failure for Leon Camier’s MV Agusta eased Chaz Davies’ path through the field but his ascent up the order ended at sixth place. Nicky Hayden gave the new Honda its best result to date in seventh while Xavi Fores, Roman Ramos and Markus Reiterberger completed the top ten.