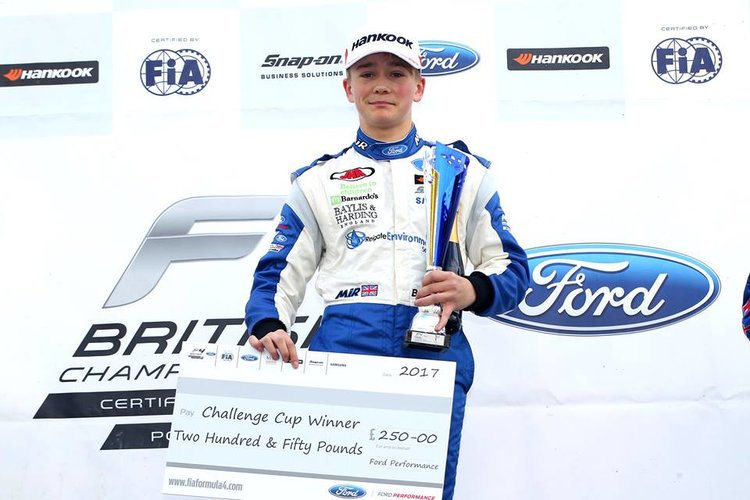 Monger had been a front runner in the F4 Challenge Cup (Credit: JEP)

The crowdfunding campaign for Billy Monger, set up to help the 17-year-old get after-care and therapy has surpassed its £260,000 goal within the first six hours, currently sitting at 200% of the target, 23 hours after the announcement from Steven Hunter at 16:00 Wednesday afternoon.

By 22:00, the target was already at the pre-set £260k and continued to rise, with 12,500 people having already donated. Hunter, team boss of the JHR Developments outfit that Monger raced for in the F4 British Championship, hosts the crowdfunding service that recently doubled the original target, raising over £520,000.

Donations have come in not just from fellow competitors and fans of Billy, but from all over the racing world. The Formula 1 community has seen vocal support from many drivers including Lewis Hamilton, Felipe Massa and Marcus Ericsson.

As well as support, significant monetary donations from the likes of Jenson Button raised £15,000, a number that was later matched by Max Verstappen.

Button was not the only large donator, with Chip Ganassi gathering around £1,000 for the cause and Rally driver Steve Perez offering £10,000. Meanwhile, former British F4 competitor Devlin DeFrancesco donated £26,000, a notable amount for a driver still trying to fund his own career in junior racing.

Elsewhere, Stephane Ratel of the SRO gave £5,000 as well as donations from a number of drivers up and down the BTCC paddock, including Tom Ingram and Matt Neal. All cars will also feature the #BillyWizz signage for the next round at Thruxton.

It has been announced that Monger has woken up after being placed in a medically induced coma, with the JHR driver understanding the situation he’s in. He’s already talked about how to get back into the car.

“We’ve had some real positives,” Hunter told Autosport. “Billy was breathing on his own and talking, to a degree.

“He’s aware of his injuries. He’s exceptionally positive about the situation – he’s sat there working out how to use a clutch on the steering wheel with his hands.

“That’s Billy. There’s a long, long road ahead, he’s going to go through some hard times, but I’m sure with the character he has he’ll come through it.”

The motorsport continues to support Monger through this difficult time and Hunter was grateful for the outbursts of generosity.

“JHR is a family, it’s a personal thing for us, and it’s devastating right across the board,” Hunter added. “I can’t thank people enough, especially Tom Ingram for the work he’s done and Senna Proctor who has been there every day – he’s Billy’s best buddy.

“The motorsport community is head and shoulders above anything I have ever experienced. It doesn’t matter what level you’re at, we are all doing the same thing – trying to win.”

“I’m overwhelmed, but not surprised, there’s such great support.”

By Matt Jeffray
4 Mins read
In the second of our three-part series, we take a look back at the top three finishers of this season’s British F4 Championship, and what the future holds for these future stars. Next up, Carlin’s vice-champion Zak O’Sullivan.
F4 British Championship

By Matt Jeffray
4 Mins read
In the first of our three-part series, we take a look back at the top three finishers of this season’s British F4 Championship, and what the future holds for these future stars. First up, Argenti Motorsport’s super consistent Casper Stevenson.
F4 British Championship