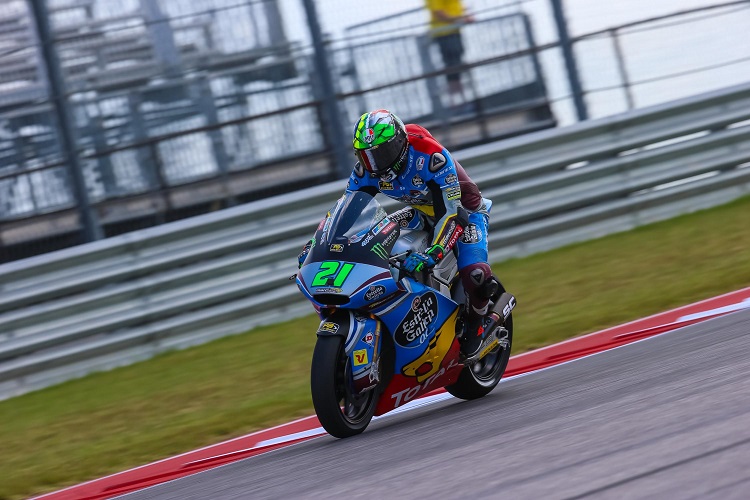 Franco Morbidelli will go in search of a third victory from three races in 2017 from pole position after coming out on top in qualifying at the Circuit of the Americas. The Italian will lead compatriot Mattia Pasini on tomorrow’s grid with Alex Marquez completing the front row on the second Estrella Galicia Marc VDS Kalex.

Morbidelli set the early pace in qualifying after setting the first sub-2:10 lap of COTA but the battle of the Marc VDS team-mates swung Marquez’s way with seventeen minutes to go, the Spaniard setting a 2:09.621 to go fastest. However, Morbidelli would strike back six minutes from time with a 2:09.379, ensuring he would retain his superiority in the intermediate class.

Crucially, Pasini had locked himself into the slipstream of the championship leader, allowing Franco to tow him up to second and splitting the Marc VDS riders. Marquez was thus relegated to third but comfortably clear of Takaaki Nakagami in fourth with Swiss pair Thomas Luthi and Dominique Aegerter completing the second row.

Miguel Oliveira couldn’t quite hit the heights of Argentina on the KTM, qualifying down in seventh ahead of Xavier Simeon and Sandro Cortese, but Ricard Cardus did impress as replacement for the injured Brad Binder, breaking into the top ten.