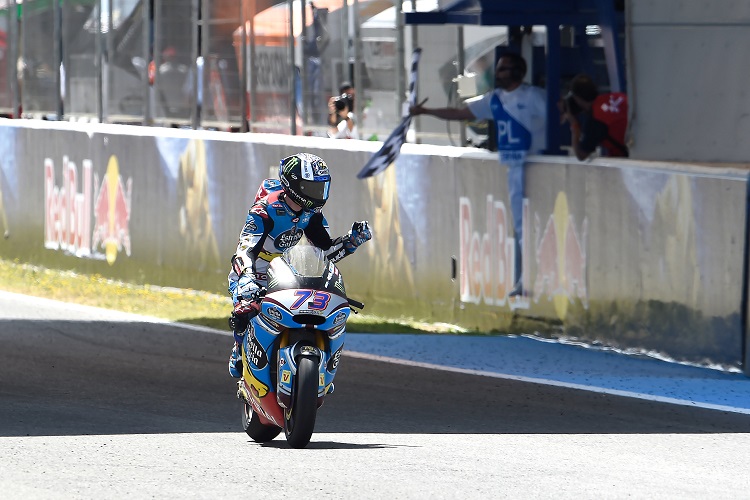 Alex Marquez took advantage of a crash from championship leader Franco Morbidelli to claim his maiden Moto2 victory on home soil at Jerez. The Spaniard broke his duck in the intermediate class at the 39th time of asking, bringing his team-mate’s undefeated start to 2017 to an end.

Marquez had dominated the weekend prior to race day but the pressure looked to be telling when the no.73 skated wide at turn five, handing the lead to Morbidelli. As it turned out though, Alex had the superior race pace and in his desperate attempts to keep the no.73 at bay, Franco lost the front end of his Kalex at turn nine, the same corner where he had crashed on Friday afternoon.

From there, the path was clear for Marquez to take a long-overdue victory while a lap two collision blew the podium battle wide open. Speed Up’s Simone Corsi instigated a three-bike clash at the Dry Sac hairpin, tagging Xavi Vierge whilst also wiping out championship contender Takaaki Nakagami.

Through the mayhem came Francesco Bagnaia who saw off the early threat from Mattia Pasini to finish a superb second, claiming his maiden Moto2 rostrum in just his fourth start. Pasini would fade, ultimately losing third to the KTM of Miguel Oliveira, but the Italtrans rider just had enough to hold off the Forward Kalex of Luca Marini.

Marcel Schrotter was the leading Suter across the line in sixth, just edging out Dominique Aegerter while Thomas Luthi salvaged eighth from a tough weekend, closing Morbidelli’s championship lead down to eleven points.

Quartararo back on top while Zarco stands out

Suzuki take control in the heat of Qatar

No change on day two as Quartararo fastest again