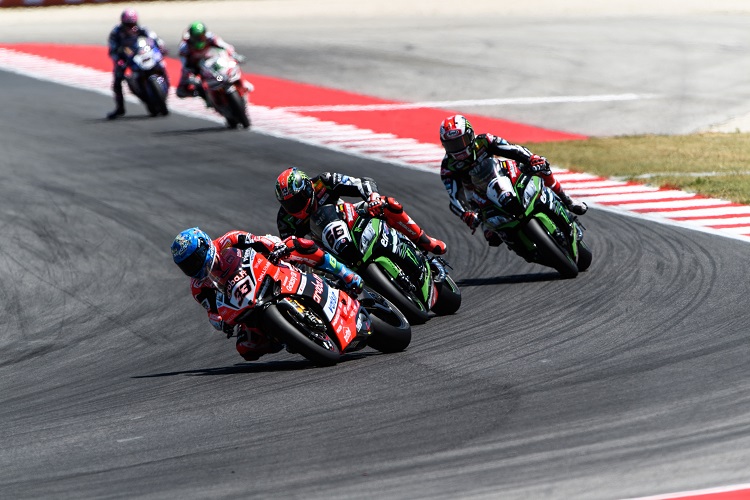 Marco Melandri took his first World Superbike victory since Magny Cours 2014 and the 100th for an Italian rider in the championship’s history after seeing off the two factory Kawasakis in race two at Misano. The Aruba.it Ducati rider gave the team some consolation after Chaz Davies‘ race-one-ending crash left him with a fractured L3 vertebrae, ruling him out of Sunday’s action.

Jordi Torres had been promoted to pole position following his fourth place finish in race one but the Althea BMW rider was outdragged into turn one by compatriot Xavi Fores while the Kawasakis of Tom Sykes and Jonathan Rea leapt to third and fourth respectively. Torres soon regained the lead from Fores but the BARNI Ducati man would have his race cruelly ended by a mechanical failure on lap six.

To his credit, and to many onlookers’ surprise, Torres continued to resist the pressure from the two Kawasakis while Melandri loomed at the tail of the leading quartet. A superb move at turn two saw him overhaul Rea while Sykes surrendered second thanks to an error at Quercia and although Torres battled bravely for the lead, Marco finally hit the front decisively on lap thirteen.

With second place seemingly in the bag, Torres suffered similar heartbreak to his fellow Spaniard Fores as his BMW gave up the ghost four laps from home. This promoted Rea into second after he had won his inter-team battle with Sykes, ensuring he will leave Misano with a 50 point championship cushion. Michael van der Mark put his race one disappointment behind with fourth following a crash for his team-mate Alex Lowes while Aprilia duo Eugene Laverty and Lorenzo Savadori completed the top six.

Raffaele de Rosa was seventh on the sole remaining BMW ahead of Randy Krummenacher and Leandro Mercado with Stefan Bradl taking the one and only Honda on a lonely ride to tenth.