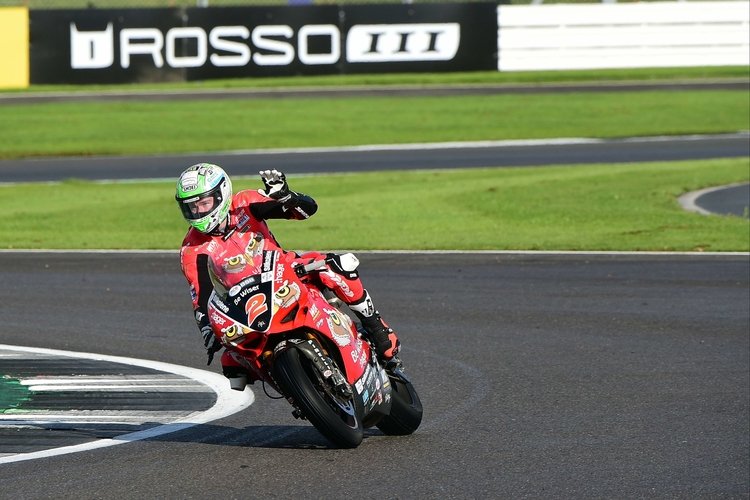 Before racing even commenced at Silverstone this afternoon, there was a protest from the top riders who claimed the conditions were not safe to race in. With a half wet, half dry track it was impossible to predict what was going to happen, and some teams opted to change tyres. Some of the field were on slicks, and some on full wets but it wasn’t an easy decision.

Glenn Irwin opted for full wets and he clearly used this to his advantage as he stormed to his maiden British Superbike victory. Unfortunately it wasn’t the same story for his team mate Shane Byrne, who crashed out unhurt on the final lap. Although he didn’t finish the race, he became the first rider to cement his place in the Showdown.

The riders were clearly struggling to deal with the tricky conditions. There were very few crashes considering, but on the most crucial weekend of the season, Leon Haslam bowed out not so gracefully on lap five as he fought to gain points to solidify his title hopes. His former team mate James Ellison was also not so lucky. He was forced to retire on lap eight with mechanical issues, putting him completely out of Showdown contention for 2017.

John Hopkins made his podium return this weekend after a hit and miss season so far, which has been hampered by crashes and mechanical failures. He enjoyed partial success by finishing third behind Josh Brookes, ten seconds clear of Jake Dixon.

Luke Mossey made his return from injury today and finished in a solid fifth place, bringing him that little bit closer to the Showdown. But he still sits on the cusp in sixth place, and will have a lot of work to do tomorrow to defend his place.

Peter Hickman has enjoyed success over the past few races, with podiums and a race win. He pulled his bike off the grid before the race to change tyres, and had to start from pit lane. But he pushed hard to come through the pack and rounded out the race in ninth, which leaves him comfortably sitting in third in the overall standings ahead of race two tomorrow.

Finally, Jake Dixon got a great start of the line, and led the first lap of the race. He was pushed back but continued to fight for fourth with Mossey and is still very much in Showdown contention, with only three points separating him and the JG Speedfit rider.