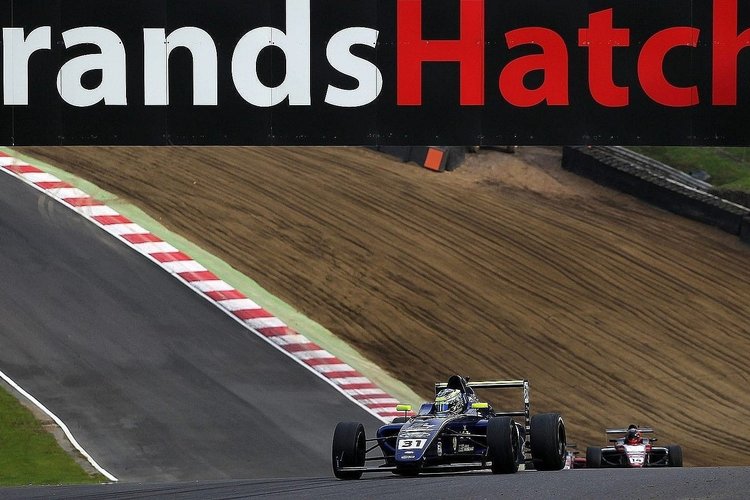 American driver Logan Sargeant was the man on form around Brands Hatch GP circuit as the F4 British Championship prepares for its final weekend of the year. Jamie Caroline, who only needs 7.5 points to claim the title, irrespective of what his rivals do, starts fourth.

It would be a strong session for the Carlin drivers, though it wouldn’t be Sargeant who led much in the early stages as Linus Lundqvist set the benchmark. The Swede’s triple retirement in the opening Brands round, has left him on the backfoot for much of the season and will be determined to prove that he’s still on par with Caroline and company as the season draws to a close.

While, the main championship may be all but sealed, the Ford F4 Challenge Cup remains wide open, with Hampus Ericsson, after dominating the last two rounds, now equal on points with Harry Webb, who returns for the first time since Knockhill.

As the time counted down, it would come down to a straight fight between Sargeant and Lundqvist and Alex Quinn as the Carlin driver timed his lap to perfection with a red flag being thrown after Oliver York hit the barrier.

Quinn would be rewarded with race three pole, but it will be Sargeant who leads the field away for the opening encounter with Lundqvist alongside. Quinn was the only other driver under the 1min 27 second barrier, with Caroline in fourth.

Behind the breakaway leaders, Ayrton Simmons leads a TRS Arden third row alongside Oscar Piastri. The Australian knows only a perfect weekend with exceptionally bad luck will hand him the title, though looks to push Caroline until the last possible lap.

Despite crashing out, York will still start seventh ahead of Patrik Pasma, while Ericsson is the first of the Cup cars in ninth. As for his rival Webb, he’ll start in eighteenth on the back row.

Dougie Bolger moves up to British F4 with Carlin in 2021