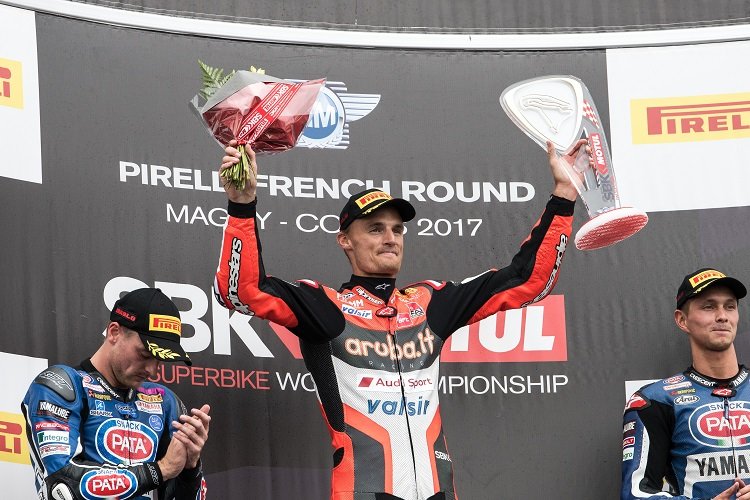 Chaz Davies returned to winning ways in race two at Magny Cours after a dramatic early incident which eliminated newly-crowned champion Jonathan Rea. The Welshman led home the Pata Yamahas of Alex Lowes and Michael van der Mark and boosted his chances of claiming the runner-up spot in this season’s championship.

The defining moment in the race came on lap two with Rea the innocent party in an incident with Eugene Laverty. The Aprilia rider lost control at the Lycée hairpin while running in sixth and Rea, who hadn’t made his usual rapid progress from ninth on the grid, was unable to avoid the RSV4. With damage to his brake lever, the three-time champion dived straight for the pits where he would ultimately retire.

With his main adversary out of play, Davies took full advantage and once he had overtaken Lowes on lap four, the Aruba Ducati rider enjoyed an unchallenged lead despite drops of rain falling throughout. Lowes, who came under pressure from his team-mate when the drizzle was at its heaviest, eventually held on to second with van der Mark completing Yamaha’s first double rostrum for six years. Polesitter Leon Camier had every reason to believe he would have figured in the podium battle but a technical failure on his MV Agusta saw him cruelly eliminated.

Xavi Fores took an excellent fourth for BARNI Ducati while Milwaukee Aprilia’s misery was completed when Lorenzo Savadori broke down on the final lap from fifth spot. Marco Melandri inherited the place ahead of Leandro Mercado and an off-colour Tom Sykes but the Yorkshireman’s result did at least secure the Team’s Championship for Kawasaki.

Jordi Torres was eighth for Althea BMW ahead of Roman Ramos with Raffaele de Rosa rounding out the top ten.