The 2017 British Superbike Championship can only be described as a pleasure to watch. With ten different race winners throughout the season, the title went down to the wire at Brands Hatch, with three riders all eligible for the win.

Shane Byrne sealed his sixth British title after a turbulent season that saw him sit out the first two races at Donington Park due to a practice crash concussion. It was by no means an easy ride for the Kent based rider, and the hotly contested championship threw up new (and old) competition.

Leon Haslam came into the 2017 season with the title on his mind after missing out to Byrne last year. 2015 British Superbike Champion Josh Brookes also made his return to the field on the Anvil Hire Tag Yamaha, a partnership that seemed unlikely due to the lack of solid results from the team in the previous year.

The 2017 season saw the arrival of former World Superbike Champion Sylvain Guintoli and ex-World Superbike rider Davide Guigliano. While Guigliano abandoned the championship due to ‘injury’, Guintoli pushed through the difficulties he encountered, and finally achieved a win at Assen.

The Honda Racing duo of Jason O’Halloran and Dan Linfoot had a difficult start to the season after receiving the new Fireblade SP2 late, leaving little time for testing and development. But just two rounds in, the results started to come and eventually, in race three at Silverstone, Linfoot took his first ever BSB victory on the machine that was struggling in other classes.

Luke Mossey started the season strong and was in with a shot for the championship, but a crash at Thruxton left him with a broken vertebra and even though he returned to racing, he never picked up the stellar pace.

How it all happened

As Byrne was missing at the Derbyshire track, Haslam took full advantage to take a double victory at his home circuit while Brookes stamped his mark on the championship by achieving a second place in race two. Luke Mossey started the season strong with a second place in race one, closely backed up by Tyco BMW’s Christian Iddon. Glenn Irwin made up for Byrne’s absence in the Be Wiser Ducati squad by achieving the final podium spot in race two.

The JG Speedfit Kawasaki dominance continued into Brands Hatch, as Mossey sealed a double victory while Haslam took second and third. Iddon returned to the podium once more, taking third in the first race, and second in race two. But Byrne was back and hungry for points. A fourth in race one was a mediocre start to his season, but the DNF in race two set him back even further as his main rivals secured podium spots.

As the championship moved into Oulton Park, Haslam once again clinched victory in race one. This time, Byrne had fought his way onto the podium, with Mossey further down the road in third. Race two was where Byrne returned to form, clinching victory five seconds ahead of his team mate Irwin as Haslam failed to finish. O’Halloran also took the first podium of the year for the new Fireblade and began pushing it to its competitive limit.

After a month’s break, the grid rolled into Knockhill, where Jake Dixon absolutely dominated both races, showing fans and competitors alike that he was capable of ruffling the feathers of the top racers. Byrne achieved two podiums, setting him closer to the top of the standings while Haslam – along with Irwin and Iddon, were all hospitalised after separate crashes in the first free practice session. All the while, Brookes was slowly racking up points with a steady stream of results.

From Snetterton through to Silverstone, Byrne went on to win four races and secure two podiums. It certainly wasn’t the most consistent of seasons for the reigning champion, but he triumphed where his rivals faltered.

Haslam started off his title assault strong with a win in race one, with rival Brookes in third and main rival Byrne down in ninth. But in race two, Linfoot came through once again to take his second victory in a closely fought battle with Haslam. Brookes came home in fifth with Byrne eighth, and it looked like the title could be slipping away.

Heading to the only international round on the calendar at Assen, Haslam once again secured victory but this time Byrne was closely on his tail. In race two, Guintoli took his maiden win while Haslam secured third ahead of Brookes, and Byrne narrowly missed out on the podium.

But the Brands Hatch triple header was where it counted, and Byrne sealed his first victory since Brands Hatch in July, allowing him to slowly creep up on Haslam – who finished fourth – in the standings. Meanwhile, a solid third position for Brookes saw him sitting quietly confident in third overall heading into race two, and the race for the title wasn’t over for the Australian.

Byrne firmly put one hand on his sixth title in race two as Haslam slipped back through the pack to tenth, while Brookes quietly went about his business to finish fourth. As it did last year, the title race would go down to the wire.

Unfortunately we weren’t quite treated to the race three we thought we’d get. As Haslam ran in front of Byrne and Brookes ran away at the front of the race, Haslam’s brakes failed and he was forced to bail off the bike at 170mph which sent him flying into the air fence, breaking his wrist and ankle. The title was over for another year, as Byrne crossed the line in eighth, securing his sixth title. It wasn’t all bad for Brookes either, who had overtaken Haslam in the standings and stood just three points behind Byrne overall. 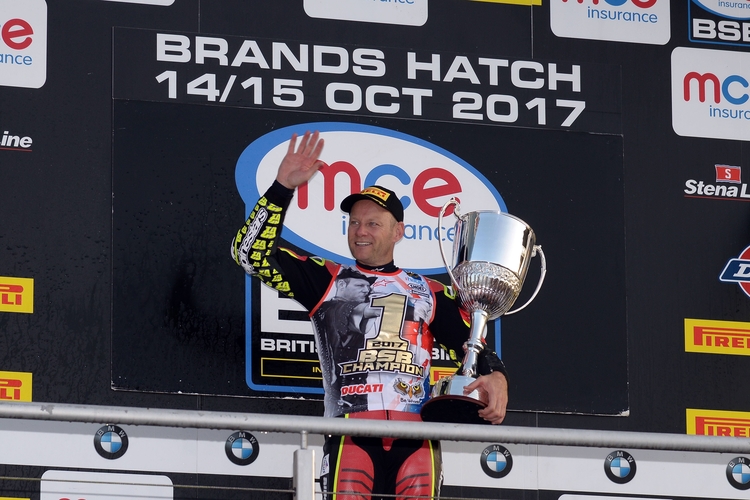 At the moment, not much has changed for the 2018 season. Byrne and Irwin will remain with Be Wiser Ducati, while Haslam will remain with JG Speedfit to fight for the title alongside Mossey. O’Halloran and Linfoot stay with Honda while Dixon, Hickman and Iddon also remain with their respective teams.

Michael Laverty will return to the Tyco BMW squad after an underachieving season on the McAMS Yamaha, and James Ellison will take Brookes’ place at Anvil Hire TAG Yamaha. It is rumoured that Brookes will move to McAMS alongside Tarran Mackenzie, who will surely make his return from the Moto2 World Championship – but it is yet to be confirmed.

After a sensational year of racing we can be sure of more quality action next season, where Shane Byrne will fight to retain his title and make it seven and Leon Haslam will look to become the bride after being the bridesmaid for so long.