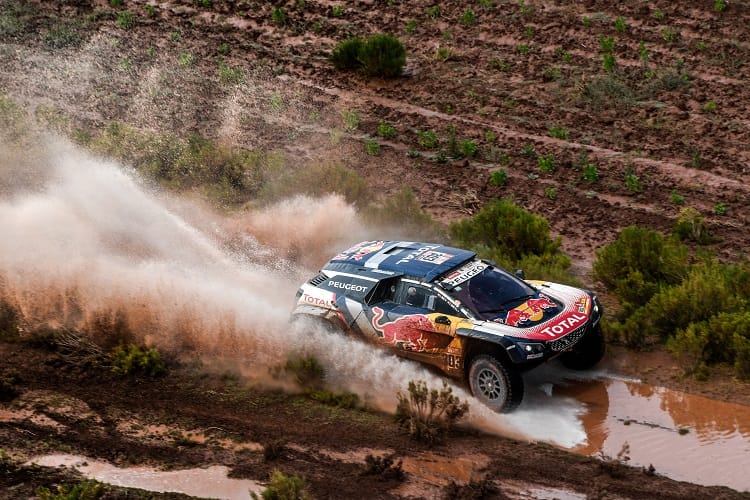 Carlos Sainz Sr. became the first driver to win back-to-back stages in the 2018 Dakar Rally, and in doing so became the rallies new leader after Stephane Peterhansel endured a tough day in Bolivia that saw him lose considerable time with suspension damage.

Heading into the seventh stage, Sainz was more than twenty-seven minutes behind Peugeot Sport team-mate Peterhansel, but as has been seen in many a Dakar Rally in the past, anything can and usually does happen, and when the Frenchman hit a rock whilst attempting to pass a rider in the bikes class, he suffered heavy damage to his left-rear suspension that required extensive work to repair.

Fellow Peugeot driver Cyril Despres stopped to provide his fellow Frenchman some parts from his own car, but the one hour, forty-seven minutes and fifty-six seconds of time lost to Sainz ensured Peterhansel dropped out of the lead and fell down to third overall, one hour, twenty minutes and forty-six seconds down on the Spaniard.

Toyota Gazoo Racing duo Giniel de Villiers and Nasser Al-Attiyah were Sainz’s closest rivals during Saturday’s 425-kilometre stage from La Paz to Uyuni, with the latter moving up into second place overall behind Sainz, although the Qatari racer is one hour, eleven minutes and twenty-nine seconds down on the leader, while de Villiers sits fourth overall, just eight seconds behind Peterhansel!

Jakub Przygonski finished Saturday’s stage fourth fastest in his X-Raid Mini, albeit twenty minutes and fifty-six seconds down on Sainz, but three minutes and one second ahead of Ford’s Martin Prokop who completed the top five ahead of Toyota’s Lucio Alvarez and Bernhard ten Brinke, who dropped to fifth overall behind team-mates Al-Attiyah and de Villiers having sat third prior to the day. 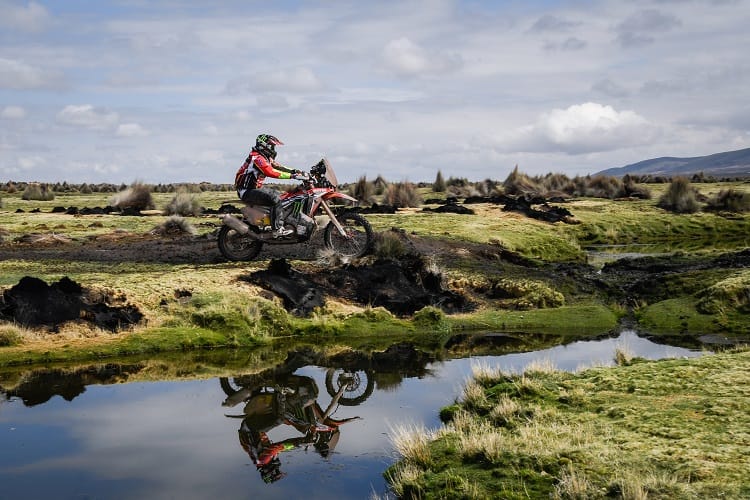 Monster Energy Honda Team racer Barreda finished the day with a two minute and fifty-one second advantage over Yamalube Yamaha Official Rally Team’s van Beveren to claim the stage win, but with Benavides eight minutes and two seconds down, it ensured van Beveren reclaimed the lead of the rally he lost during Thursday’s stage.

The Frenchman now three minutes and fourteen seconds ahead of Benavides heading into Sunday’s eighth stage, while Barreda is only a further one minute and thirty-one seconds back in third as he continues making ground after losing a lot of time earlier in the rally.

Toby Price was the best placed of the KTM riders on Saturday, finishing fourth fastest, eight minutes and forty-three seconds down on Barreda, while leading Husqvarna racer, Pablo Quintanilla, was fifth, just ten seconds further behind the Australian.

Matthias Walkner finished sixth fastest to ensure he remained the leading KTM rider in the overall standings in fourth, but the Austrian is eight minutes and eighteen seconds down on van Beveren, but five minutes and sixteen seconds ahead of team-mate Price. 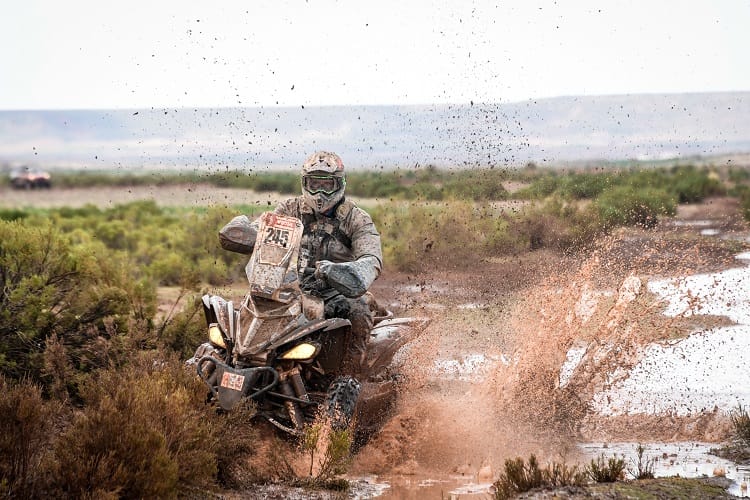 Casale now leads Alexis Hernandez by one hour, one minute and nine seconds overall after the Peruvian lost almost twenty minutes to the Chilean rider on the day.

Argentine rider Pablo Copetti, who had been third heading into the day, withdrew from the rally due to fatigue and mechanical issues, which means that his countryman Jeremias Gonzalez Ferioli moves up to third overall, one hour, twenty-eight minutes and thirteen seconds away from Casale. 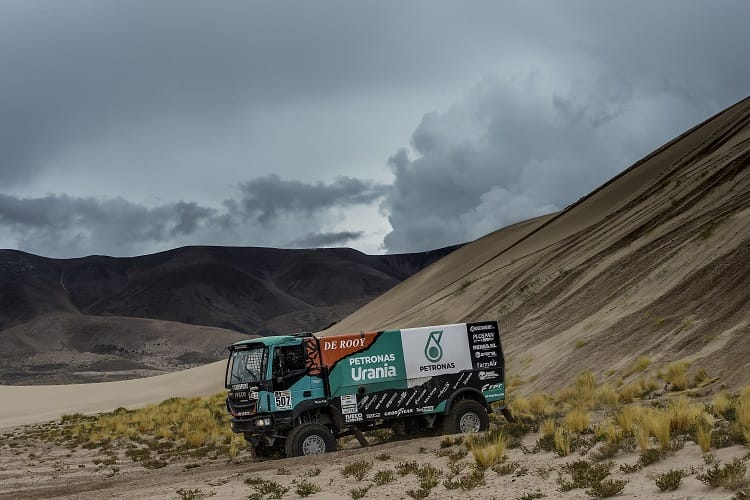 Dutchman Ton van Genugten secured his first stage victory of the 2018 Dakar Rally on Saturday, with the Iveco racer ending two minutes and one second clear of Federico Villagra.

Villagra’s runners-up spot ensured he was able to close in a little on rally leader Eduard Nikolaev, but with the Russian ending third quickest on the day, the Argentine was only able to reduce the gap by two minutes and fifty-three seconds, ensuring the deficit to the leader is still forty-nine minutes and forty-seven seconds.

The top five on the day was rounded out by Czech drivers Martin Kolomy, who finished five minutes and forty-nine seconds back, and Martin Macik, while Siarhei Viazovich maintained his third place overall with a sixth place finish on the stage, but the Belarus driver is now two hours, forty-nine minutes and eight seconds off of Nikolaev. 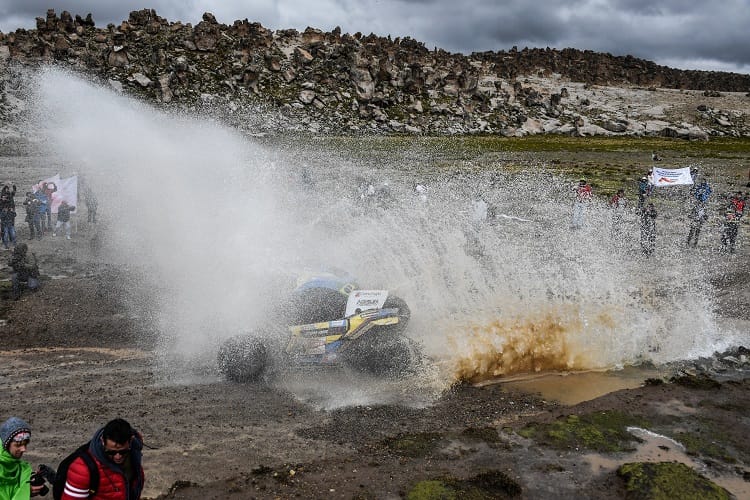 Brazilian Reinaldo Varela further extended his advantage at the top of the UTV class of the Dakar Rally by taking his third stage win, with Can-Am driver finishing thirty-one minutes and thirty-two seconds ahead of Frenchman Patrice Garrouste from the Polaris stable.

Varela now holds an advantage of one hour, fifteen minute and thirty-six seconds over Juan Carlos Uribe Ramos after the Peruvian lost fifty-five minutes and twenty-nine seconds on Saturday in finishing third.

Another Peruvian, Anibal Aligra, ended the day fourth fastest, albeit two hours, eighteen minutes and twenty-eight seconds down on Varela, while fifth place went to Spaniard Jose Luis Pena Campo, who was two minutes and seven seconds further back.