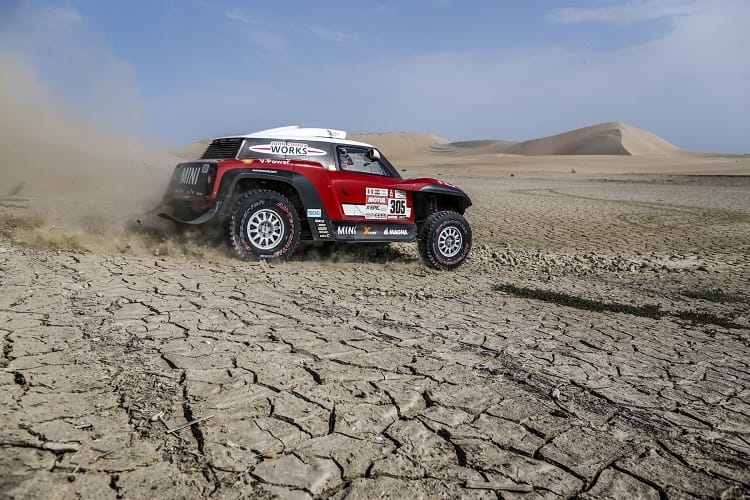 It was a disappointing, and painful day, in the dunes for Nani Roma, and despite he and co-driver Alex Haro finishing the third stage of the Dakar Rally, a late stage roll, around a kilometre from the end, cost them significant time, and Roma was taken to hospital afterwards for precautionary tests.

Roma was diagnosed with head and neck trauma, but the fact his X-Raid Mini car did not complete the 208-kilometre road section between the end of the timed section and the bivouac in San Juan de Marcona means the two-time Dakar winner will not be allowed to resume the race on Tuesday even if declared fit enough to race.

Mikko Hirvonen and co-driver Andreas Schulz were on-course for a top ten result in Monday’s third Dakar Rally stage, only for the duo to lose significant time after hitting deep sand and becoming stuck in a dune.

The pairing were forced to dig their way out of the dune in order to continue, but the damage had been done and Hirvonen lost a total of two hours and four seconds in the stage, which was a 296-kilometre trial between Pisco and San Juan de Marcona.

“We slid sideways into a dune and got stuck in the sand,” said Hirvonen. “We couldn’t move forwards, backwards or sideways and had to spend time digging to get the spare wheels underneath the car.

The best-placed Mini is now the Orlando Terranova/Bernardo Graue car in eighth position, but he sits thirty-five minutes and nineteen seconds behind Peterhansel, while Jakub Przygonski, who finished ninth on stage alongside co-driver Tom Colsoul, sits eleventh overall, forty-four minutes and thirteen seconds down.

Al-Attiyah back in control as Sainz Sr. suffers suspension issues