Speaking to The Checkered Flag moments after it was announced that BT Sport would continue to provide exclusively live coverage of MotoGP for the next three years, James Toseland praised Johan Zarco for his exploits on and off the track.

The two-time World Superbike champion believes that Zarco’s achievements for Tech3 Yamaha in his debut season in MotoGP were “absolutely phenomenal.”

During our conversation, the BT Sport pundit also shared his thoughts on Jorge Lorenzo, the problems at the factory Yamaha team and gave an early title prediction.

Let’s start with Johan Zarco. Just how impressed were you with him last year?

Well, I think I would be one of the rare people that could really tell you just how good he did because I had a go at it for the same team. I had around 10, six places and there was a few times I was close to the podium with those sixth places, but to see what he achieved is absolutely phenomenal. I know it was a different times, now it’s 1000cc machines rather than 800s and all the rest of it, but I know exactly what happens in that garage, how the team runs and how the Tech3 package is compared to the factory package.

I knew he was an outstanding Moto2 rider, being a two-time world champion, but you never know from those sister classes, how they’re going to adapt. He just seems so levelheaded and calm. His personality seems to just fit with the mentality that someone needs to do what he is doing. Fair play to him. He’s been outstanding and it’s nice to see a French rider be impressive again – it’s been a while since the days of Olivier Jacque and Randy de Puniet.

So are race wins on the cards this year?

Ooh race wins is another matter because there are two Hondas, two Yamahas and two Ducatis and if they are on it, a satellite bike will always find it very, very difficult to beat the factory boys.

But that is no detriment to the rider, it’s just a fact of the factory bike compared to a satellite bike. If the weather conditions are a little bit iffy as we’ve seen in the last couple of years – we’ve seen masses of that – there is every chance that Johan Zarco can win many races this year. If he… I don’t want to say if he gets a little bit of luck… But on a satellite bike you do need a bit. He has definitely got the capabilities for it. If he was on the factory bike then I would say absolutely. 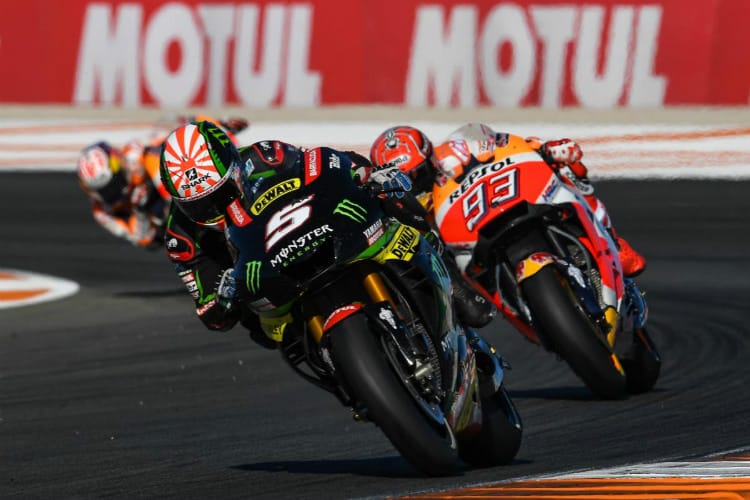 You mentioned the factory bike, there have been more negative comments from the Thai test. What’s gone wrong with Yamaha and how can they turn this around?

This close to the season, it’s going to be a difficult task for the Yamaha engineers. I’ve seen them doing the aerodynamic tests – obviously Ducati have started something off there. I think the development for the other manufacturers was scuppered because from the start, Dorna were saying these wings were going to be banned and everybody wanted them to be banned. They were banned, but then they found a way around it.

With all that confusion, the other manufacturers have been on the back foot and have been trying to catch up. So that could be a factor because obviously that does help. I know that those wings hold the front end down between 3mm and 5mm and as a rider, it’s a big difference if that is helping the wheelie and helping the force on the front for the mid-corner and for the turning. Aerodynamics is definitely a factor.

I don’t know what the top speed is like and Yamaha have never really had too much of a problem with that over the last couple of years. I don’t see many changes on the engine on the Honda or Yamaha, so I can’t see horsepower being a problem. It must be more to do with the chassis, which is a big task unless you go back to something you worked with in previous years like we’ve seen before. They might go with a 2016 chassis and A/B it, you know, but it is bit of a bit of a worry for them.

Moving onto Ducati, Lorenzo had what I would call a successful year in 2017. Okay he didn’t win any races, but he did a lot of development. Do you expect him to be challenging for the title this year?

I actually called it and said that Dovizioso would have the better of him in his first year, but that was mainly down to his experience on the bike because it does seem that on the Ducati, or it has in recent years, that everyone who has jumped on it, has seemed to adapt to it very, very quickly.

In previous years it took a rider of a different manufacturer a long time to get used to the different way of riding the Ducati. I did call it that Dovizioso would have the better of him last year because of the experience. The actual ride-ability, I would say was very, very close between Dovi and Lorenzo.

If Dovi can keep getting the better of Jorge again, he is against an Italian on an Italian manufacturer you know so it is a tough job for Lorenzo… But has he got the talent to win races and to win championships? We’ve seen it before and he definitely has. The championship with Lorenzo at the sharp end is a better championship.

I’m just going to forget the Thailand test because it’s a brand-new track. He might have been trying to develop new parts that didn’t quite work for that particular test so I will see at Qatar. Qatar has always been one of his favourite tracks and the Ducati has always been successful there as well. It’s a rider confidence thing. Because that track is so strong for Lorenzo in particular it could really give him that boost.

With the issues that we are seeing at the moment, if he goes there and gets a win, then all of a sudden it could just spark something – he could be competitive all season and I do hope that this is the case.

Jorge Lorenzo will hopefully be competitive in 2018 (Credit: MotoGP.com)

I guess the key is for him to keep his head, which hasn’t always been the case…

He has been known to throw his toys out of the pram, but even in troublesome times last year he never really flapped too much about it and I was surprised because he just always does doesn’t he? So perhaps he has got a bit more of a relaxed approach to it now. But that was his first year, I know Ducati, I rode for them for five years, they won’t allow Lorenzo, on the wages he’s on, to be number two to Dovi because he was employed to win the championship for them.

They will quickly start to ask questions if he is finishing where he was at the Thailand test. Lorenzo knows this and Lorenzo’s talent and everything else is more than that so I just hope that it clicks.

If we’ve got Marquez and Pedrosa on the Honda, we’ve got Valentino Rossi and Maverick on the Yamaha and we’ve got Dovi and Lorenzo, and that’s before you talk about, Iannone on the Suzuki and the KTMs… all of those riders, on the same tarmac… It’s just going to be awesome and there is a strong possibility of this happening.

Talking about Iannone, it started to come together at the end of last season. Do you believe he can carry that on now that he is a bit more comfortable in the team?

I would have said so. He had a good test in Sepang, and then Rins had an amazing test at Thailand too – his team-mate – so I think the results for Iannone and Rins are a bit more difficult to predict just because Suzuki had a bit of a poor season last year after losing Maverick.

I think Iannone and Rins are more than capable of finishing in the top six and I just hope that Suzuki have found something, which at the last test it looks kind of like they did so hopefully they can keep it going.

Early prediction for the title?

Marc Marquez! Honda look like they have built a good bike and by having the best bike with Marc on it, they could be unstoppable. Qatar might be different because of the Ducati but I can still see him being very, very difficult to beat.

BT Sport is where the best in sport go head to head. Watch the new MotoGP season exclusively live on BT Sport 2, starting in Qatar on Sunday 18thMarch. For more info visit www.BT.com/sport

By Justin Nguyen
5 Mins read
NBC plans to end NBCSN before the end of 2021. Motorsports like NASCAR, IndyCar, IMSA, and MotoGP, which have races on the network, will have to look for alternatives in the NBC family like USA Network.
Formula Renault EurocupInterviews